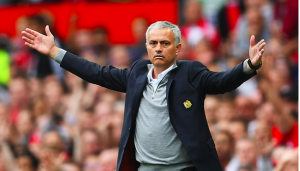 New Manchester United boss Jose Mourinho is looking to put his stamp on the team over the next two transfer window. After a stuttering start to his reign as the Red Devils boss things have greatly improved although he will not be happy that his team sits in fifth place at the moment. He has had a chance now to fully assess the squad and will be looking to move on the ones that do not meet his requirements and fill their places with world-class stars. It has led to a large number of punters using a Ladbrokes free bet to put money on who they think is coming and going over the January window.

Mourinho is rumored to be wanting the Red Devils to sign striker Antoine Griezmann who now plays for Atletico Madrid. It is also rumored that he is looking to bring in Nélson Semedo and Victor Lindelöf to Old Trafford. Both players are now at Benfica and play in defense. Another possible target is Tiemoué Bakayoko who plays in midfield for Benfica.

If Mourinho is successful and manages to attract all four targets to Old Trafford during the January or summer transfer market, it will take his spending past the £300 million. The manager will be under great pressure to deliver after spending so much cash on new players but it is something that is needed if the team is going to be top dogs in the EPL once again.

The possibility of all four targets coming in the January transfer window is extremely slim and it has been reported that Man U will wait until the summer for Semedo, Bakayoko, and Griezmann. Mourinho though would like to try to bring in Lindelöf to act as defensive cover and help boost his team’s chances of qualifying for the Champions League next term. The player has superstar agent Jorge Mendes as his advisor and is now in talks about the possible move to Old Trafford for around £38 million.

The players that will excite the fans the most about the possibility of him joining the club is Antoine Griezmann. The Red Devils will have to pay a huge transfer fee if they are to secure his services as they will have to meet the player’s release clause which is set at £84 million. Griezmann is the star man at Atletico and they pulled out of all the stops to make sure that he signed a contract extension last summer to keep him at the club until 2021.

Mourinho spent big when he arrived during the summer and it has taken time for his new signings to settle. The Red Devils paid a world record fee of £89 million to secure the signing of Paul Pogba. Big things were expected from the ex-Juventus player and he has shown in patches his ability but is so far to do it on a regular basis. With the additions of Zlatan Ibrahimovic, Henrikh Mkhitaryan, and Eric Bailly, United splashed the cash during last summer’s transfer window to a tune of £145.7 million to back their new manager. If Man U can get all of their top four targets they could spend over £325 million which would break every record going by a long way.