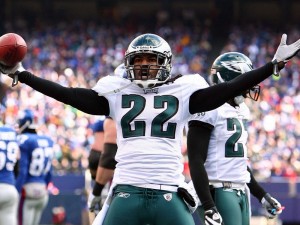 After months of trade speculation, the Philadelphia Eagles have finally dealt Pro Bowl cornerback Asante Samuel. He’ll be sent to the Atlanta Falcons in exchange for a seventh-round draft pick in the upcoming 2012 NFL Draft. The news was first reported by NFL.com’s Jason LaCanfora.

This trade has been coming down the pipeline for months now. Samuel is 31, a bit old for a cornerback, but was due to make $21M over the next two years. The Eagles, strapped for cash after their “Dream Team” free agency spending last year, wanted to unload Samuel, a move that Samuel actually had mutual interest in.

Samuel now joins a talented Falcons secondary, that has Pro Bowlers Dunta Robinson and Brent Grimes already manning the defensive backfield in Atlanta. This is the latest aggressive move by the Falcons to add a key player in order to become more of a contender; last year they moved up an almost-unheard-of 21 spots in the draft to select wide receiver Julio Jones.