The New England Patriots and Atlanta Falcons are getting ready to play in the biggest game of their lives in less than 24 hours – well, except for a few of those New England guys like Tom Brady and coach Bill Belichick. But other than them, most of the players that will take the field in tomorrow’s big game will be playing in one of the biggest events in the world. And just like every Super Bowl, there is so many things going on that it’s hard not to miss things. So with that, here is the ultimate guide to follow for your Super Bowl Sunday.

Super Bowl 51 pits the number one ranked offense (Falcons) playing the number one ranked defense (Patriots) for the first time since 2013 – with the defense winning that outcome as the Seahawks crushed the Broncos. In addition to that stat, below is an infographic that gives perspective about fan attendance. 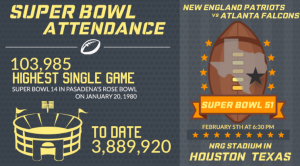 It’s hard to believe there has already been 51 Super Bowls with nearly 4 million people who have attended the previous 50 games. So make sure to pay attention for the number of fans that are in the stands at the game. Remember, the cost of a ticket is extremely expensive for these games ranging from $3,000 to as much as $12,000 or more per ticket. Better have some deep pockets for those tickets.

So what about the rest of the USA and world who can’t go to the Super Bowl and watch the game live? Well, there is an excellent infographic that shares information on the viewership from different years as well as the new medium which is watching the game from a mobile device or just online. 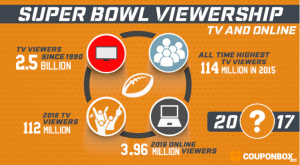 In 2016 alone, there was more online viewers that watched the Super Bowl than the total number of all 50 Super Bowls combined. That shows you how far we have come technologically since the early years of the NFL’s biggest event.

With all these huge numbers and large platform, you must be wondering about the money the Super Bowl generates. Well, put it this way, since 2007, Super Bowl spending is estimated at $149 billion dollars. It’s hard to even picture where all this money comes and goes, but I think it’s fair to say that this is a money stat that won’t be getting passed over anytime soon.

And last but not least, we can’t forget the halftime show. While this isn’t necessarily a stat guide to the big game, there will be plenty of different bets that take place in regards to the performance by Lady Gaga. You can expect a great show – especially considering there will be an intro by Tony Bennett.

So there you have it, three great statistical infographics for you to view and keep in mind when watching tomorrow 51st Super Bowl game. Hopefully it’s one great game and everyone has fun watching!