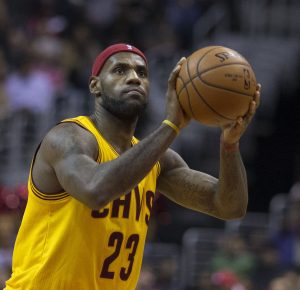 NBA champion LeBron James recently told Sports Illustrated that his “motivation is this ghost I’m chasing. The ghost played in Chicago.” ‘Shoeless’ Joe Jackson? In that case, LeBron, all you have to do is build a baseball field on your property. If you build it, he will come. Oh, wait; it seems he was referring to Michael Jordan there. I got confused, what with all that Michael Jordan not being dead and whatnot. Rolling Stone’s Jason Diamond reacted to James’s statement by advising The King not to pursue a ghost, even a still-breathing one, and went on to expound his reasons, which I’m sure all very convincing.

But I think he’s wrong. I think LeBron James should be commended for setting his sights on the highest possible target. It sort of reminds me of Manhattan when Woody Allen is accused of thinking he’s god and he replies “well, I gotta model myself after someone.” Woody also said he would much rather achieving immortality, not through his work, but through, you know, not dying. Obviously, that’s not how James sees things. He probably knows that MJ would be the odds-on sports betting online favorite if he were to face him, and both were at their respective primes.

Does that mean he should quit striving to be the best? By no means. Like Ric Flair said, to be the man, you gotta beat the man. However, LeBron can’t beat Michael Jordan. That’s not to say he couldn’t beat him; it means we will never find out – Jordan has been retired for a while now and it appears this retirement will take.  What James wants is not simply victory in a one-on-one confrontation, though. What he wants is a more long-term goal; he wants to be remembered as the greatest that ever set foot in a basketball court. And to do that, he has to ‘exorcise’ the ghost of Michael Jordan out of every NBA arena.

That’s a nigh-impossible task. He would stand a better sports betting online shot at carving Thomas Jefferson’s face in his very own likeness at Mt. Rushmore. Or hopping into the Delorean and prevent James Jordan from ever meeting Deloris, thus wiping MJ off the space-time continuum. Not even starring a Space Jam sequel could help LeBron take Michael’s place in our collective hearts. It is possible that James is very much aware of this, and yet he will still try his damnedest anyway. Why?

Why not? To paraphrase Dr. Cox, the pursuit of perfection should be an endless endeavor. LeBron. You know, James to MJ’s former coach Phil Jackson that he “is not Michael.” Isn’t sort of sweet, though, that after all this time, even with all of the championships, fame, money, and accolades, deep down, he still just want to Be Like Mike? It’s like a sports betting online fan wanting to be like, well, Mike – but we had better not go there. In the end, in our heart of hearts, don’t well want to be like His Royal Airness?