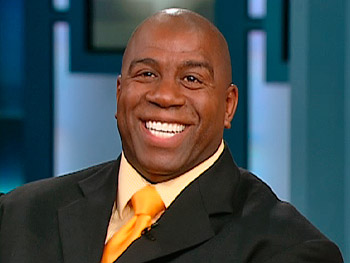 The Lakers are one game away from the unthinkable. Elimination. Maybe Andrew Bynum shouldn’t have opened his mouth. But this is Andrew Bynum we’re talking about, and really, who knows what the hell is going on his cranium the last two years. Either way, his comments definitely struck a chord in the Denver locker room. They have been playing inspired ball ever since those presumptuous words left Bynum’s lips.

To think this may be Kobe’s last shot at really being the key component in winning a championship is almost sacrilegious.  So someone is going to have to pay the consequences right? Well according to Magic Johnson, the Lakers brass will not tolerate them choking away a 3-1 series lead, that would include two losses at home.

“They’re going to run Mike Brown first out of town,” Johnson said as an ESPN NBA analyst Friday. “Then second will be [Andrew] Bynum. Then third will be [Pau] Gasol.”

Its been that type of year for the first-year coach

“His job will go”

Magic, who still remains on the payroll as vice president, has made other claims throughout the years. There is no secret Magic is very outspoken when it comes to the Lakers performance. Magic Johnson ended by reiterating that coach Brown would be gone.

“Mike Brown will not be coaching the Lakers if they lose this game,” Johnson said. “There would be so much pressure on Jim Buss and the Laker organization to get rid of him.”