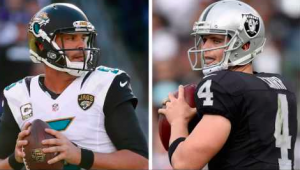 With the NFL season just around the corner, many football fans are anticipating another fun-filled season rooting on their favorite team. But football fans stay in involved regardless of their team’s success because of the many other options the NFL offers like fantasy football or wagering on games. However, the NFL is very tough to predict what teams will be surprises and which ones will be disappointments because of the parity of the league.

Since we’re talking dark horse NFL teams, we’ll stick with the surprise teams that you should be keeping an eye out for — especially if you’re into wagering on teams for week 1, or putting down a few bucks for a predicted Super Bowl team. And to check out the latest odds, visit matchbook to see the different lines.

The Oakland Raiders aren’t exactly the league’s doormat team anymore as they showed last year winning seven games. Expectations are high in year 2 of the Jack Del Rio era in Oakland and with third year quarterback Derek Carr looking to continue his excellent sophomore year, the Raiders could be on the verge of something big. Receivers Amare Cooper and Michael Crabtree give Carr big-time weapons and the depth at running back has the brass of Oakland looking like football geniuses.

Success will be determined ulitmiately by Carr’s contineued development and the defense. Oakland put a lot of emphasis on improving the defense with bringing in multiple free agents and drafting safety, Karl Joseph. If you’re looking for a team that can surprise the league, Oakland will be one of them.

It’s going to happen soon rather than later. Jacksonville has been the NFL’s doormat team for years now but are beginning to show signs of life under the coach Gus Bradley. The sometimes overlooked third Florida team has reason for optimism with quarterback Blake Bortles. Like the aforementioned Derek Carr, Bortles also enters a highly anticipated third season — one in which he came off throwing 35 touchdown passes the year prior.

The Jags have last year’s rookie Dante Fowler — who missed all of last season due to injury — making his return. Another injured rookie was this year’s first-round pick Jalen Ramsey who will be looked at to help bolster the defense. If the Jags offense continues to make the strides it did last season, that alone will keep them in games. Imagine what will happen when the defensive side of the ball catches up.

A lot like the Raiders, if Jacksonville’s defense makes big strides this season, expect the Jags to take over the NFL by storm — considering how bad they have been.

This might be the last season Rex Ryan has as an NFL coach, so expect the Buffalo Bills to be prepared to give the NFL a reason to be worried. This is because the Bills have had plenty of talent for years now, but just can’t get over the hump of winning 8-8 or 9-7 every year. But second year starter Tyrod Taylor looks legit and the Bills offense — again, much like the aforementioend Raiders and Jaguars — can be extremely scary for opposing defenses.

With Tom Brady being suspended for this season’s first four games, now might be Buffalo’s best shot to stop their 16 year NFL playoff drought. Rex’s twin Rob has joined the team as an assistant and will help continue to implement the defense the Ryans have been known for.

Of course this is a huge “if,” but if Buffalo can stay healthy — a huge if — this team can make a lot of noise this year out of Western, New York. The problem, however, could be that the Ryan brothers might be better suited to run NFL defenses not teams. This could either blow up in Buffalo’s face or be the factor that pushes the team to an epic run.

Don’t be surprised if this is the year Buffalo is finally heard again by the rest of the NFL.