After last night’s 6-3 loss to the Penguins, Head Coach John Tortorella addressed the media and had his first memorable sound bite of the season.

When asked about an open ice hit delivered by Pittsburgh’s Brooks Orpik tothe Rangers’ Chris Krieder, Tortorella didn’t torch the opposing player for a vicious hit.  It would have been tough to criticize the hit since it was clean, so he instead dropped this line to signify how he has felt of his team’s play so far this season:

“That’s a big problem with our club right now.  Maybe we need to get whacked around a little bit more to wake us up.”

Tortorella was clearly using the Kreider hit as a way to motivate his team, which is now 0-2 on the lockout shortened season.  Even in a 48 game season it is too early to hit the panic button but because of the condensed schedule, a slow start could hinder a team more than ever and the Rangers can’t afford to be in that position.

Many around the organization think the time is now with most of last year’s team returning and also adding Left Winger Rick Nash in the off-season   They have one of the best starting lines in the entire league to go along with a top flight goalie and depth that makes any line on the ice a threat. 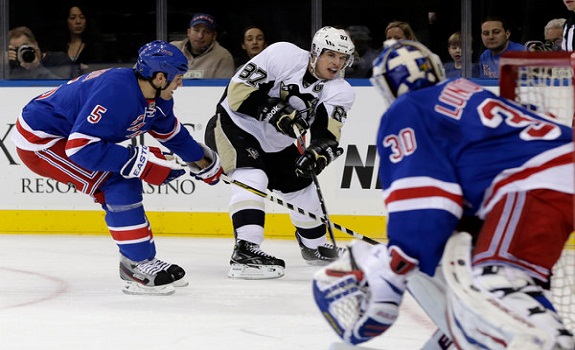 Dan Girardi (5, left) defends the Penguins’ Sidney Crosby in Sunday’s loss. It was the first time that goaltender Henrik Lundqvist had been pulled from a game since 2011. PHOTO COURTESY: SETH WENIG/ASSOCIATED PRESS

Henrik Lundqvist has been missing.  Lundqvist has given up seven goals through the first two games and was pulled last night after surrendering four goals on just 18 shots.  It was the first time that Lundqvist had been pulled from a game since March of 2011 when he was pulled after two periods in a game against the Islanders.

In Lundqvist’s defense, his play has not been the only reason for the 0-2 start.  Last night, Tortorella claimed he pulled his goalie because he did not want to leave last year’s Vezina Trophy winner in the game with that quality of play in front of him.

Another thing that should slightly scare the Rangers is that once you are behind, it is hard to climb the standings in the NHL.  Take the Devils’ 2010-11 season which was a classic tale of a team playing completely different in the first half of the season compared to the second half.

After the Devils started the season 9-22-2, they fired their Head Coach John MacLean and rehired Jacques Lemaire.  Lemaire led the Devils to a 29-17-5 record in the second half but, because of the bad start, the Devils failed to make the playoffs for the first time since the 1995-96 season.

Now obviously, the team should not and will not get written off after two games.  However, this year more than ever, there has to be a sense of urgency to get the ship right because they are only playing about half of the games they normally would.  They played two very good teams in Boston and Pittsburgh on back to back nights which wouldn’t be easy for any team to win but the Rangers aren’t going to use that as an excuse.

What is nice for the Rangers right now (besides the fact that they have only played two games) is that other teams around the league have also started 0-2, most notably Atlantic division foe the Philadelphia Flyers.  It most certainly isn’t over and no one is saying it is.  However, with a shortened season, a slow start can put a team behind the 8-ball worse than ever.

Maybe Sunday’s loss will be the “wake up call” that Tortorella expects from his team.