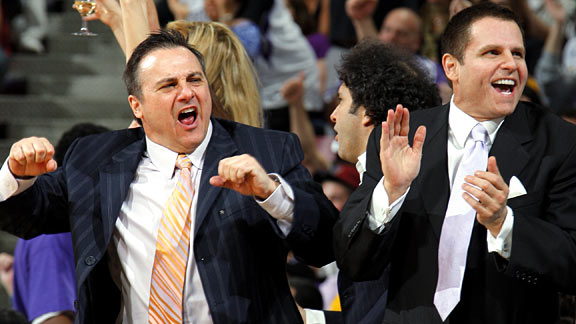 The Maloof family finally appears to have relinquished its majority ownership in the Sacramento Kings franchise. The Maloofs have reached a purchase agreement to sell a 65 percent controlling interest in the franchise to a Seattle group led by Chris Hansen and Steve Ballmer. The Kings franchise has been valued at $525 million and both parties are now waiting on the league to approve the deal.

One person who seems to take issue with the deal is LeBron James. Of course, he won’t have a say in what gets approved and what doesn’t, but James still voiced his opinion on Twitter.

So the Kings getting sold for 525M!! And the owners ain’t making no money huh? What the hell we have a lookout for. Get the hell out of here

James went on to tweet that he can’t hate on the Maloofs’ hustle. Maybe somebody should let LeBron know that the Maloofs have been reportedly in financial turmoil for quite some time. It was just a matter of time before the franchise was sold.

And from what I hear the 525M isn’t even the whole % of the team! Smh. One thing is I can’t hate on their hustle though. Crazy