Training camp and preseason play is all about competition. It’s the first-time teams get to together, and they actually compete. My favorite part is when the position battles come out. For most teams the No.1 positions are set; it’s the second and third string that I find interesting. The New York Giants are no different.

Rookie Rueben Randle is fighting with Domenik Hixon for the No.3 receiver spot. Many think that Hixon will win that job, mainly because of his veteran status. However, don’t sleep on this kid from LSU.

Randle is going to be a guy whom Eli Manning is going to learn to lean on in big moments. That may not come this year, but he will be a solid and dependable third receiver. Hixon has been solid, but he is a boring receiver. While Randle could hit the big one on any play. Last night was the perfect example of just this. Hixon had one reception for four yards while Randle had a catch that tallied 49-yards from David Carr in the third quarter. The catch was a beautiful diving grab, one that fans and coaches will remember. 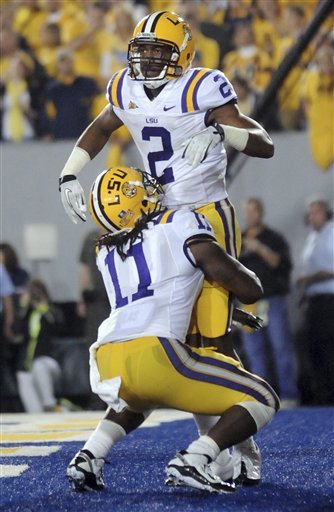 “It was a nice play, a very nice play,’’ Coach Tom Coughlin said. “I would’ve liked to see him block a little better when he had an opportunity.’’

Don’t get me wrong Randle is still a rookie and has more to learn than Hixon, but his lack of blocking is worth it when it comes to his play-making ability. Expect this competition to go back and forth and before the depth charts are finalized going into the regular season, don’t be surprised if they switch back in forth throughout the season too. In my opinion, Randle is the better choice for the job and a receiver whom Manning is going to enjoy passing too.