It’s about that time to start thinking about football, not just football, but position competitions. Much like the one that is in New York.

In February, the New York Jets traded for Tim Tebow. A move that didn’t come without question. The Jets have Mark Sanchez, a young and up-and-coming quarterback. However, maybe there are some doubts in the coaching staff with Sanchez? Or, was this a move strictly to strengthen up the quarterback position?

Let’s break down that decision, the Jets may have made it for both reasons. Look at how Sanchez finished the year. He struggled down the stretch, and they failed to make the playoffs due to inconstant play. He finished the year with 18 interceptions, which isn’t bad, but they came at the worst times. I am sure you can remember some important ones. I think of the New England and the Miami games. However, then you get games were he plays similar to the best quarterbacks in the NFL. So honestly, you never know what you are going to get from him. Personally, if he plays hard and actually shows some heart, he will be the starter all season, but don’t expect that. 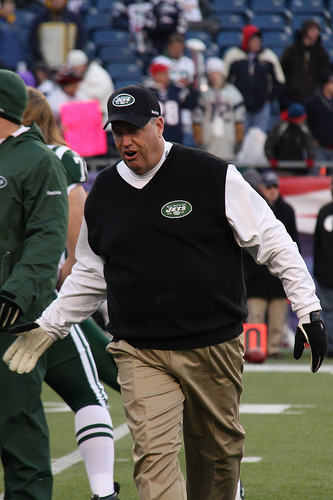 If you looked up “heart” in the dictionary you would find the definition of Tim Tebow. This man has so much heart; it’s incredible.

Tebow replaced Kyle Orton last year in Denver. He turned a team around that looked like they were going to be fighting for the No.1 pick in the NFL draft. He went into the game and suddenly the whole team played harder, and stronger, and it looked like they had their “man.” Tebow went on to return them to the playoffs and even winning a playoff game. As the season went on Tebow’s passing game increased, and his play looked better and better. His biggest attribute is his ability to run; he is a load to take down. Teams also shouldn’t fall asleep on his passing ability; he had a few games that his passing game looked great. I can’t fault Tebow for his bad passing games, some games he was only asked to throw eight times. You can ask any football fan, and they will say a quarterback needs to find a rhythm. The Broncos never allowed him to do that. Therefore, he struggled passing for most games. It’s like this, in basketball would you have your shooting guard play the whole game, tell him not to shoot and with the game on the line, have taken the final shot? No, you wouldn’t, so the Broncos shouldn’t have done that either.

Rex Ryan was hired as the head coach of the New York Jets to win, and he plans to do so. The one thing people can agree on is that Tebow wins games, it may not be pretty, but he wins. He loves to run the ball and throw it when necessary. Doesn’t that sound like someones offense?

As the two quarterbacks go at it this training camp, on thing you must keep in mind. Rex Ryan was a big part of Tebow coming to New York, did he bring him over to sit on the bench? No, I don’t believe so, plan on him winning the starting job, it’s just a matter of when he wins it.

Regardless this is a problem that we will enjoy watching, and Rex Ryan will stress over for many weeks.