After almost thirteen star-studded seasons in the NBA, Dirk Nowitzki had accomplished basic 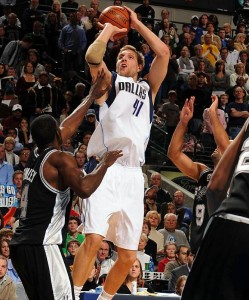 ally everything a hall of fame type of player could ever dream of accomplishing, and then some, but one thing still eluded Dirk and his beloved Dallas Mavericks team. An NBA championship. The one coveted prize that every pro player envisions upon entering the NBA.

Young and bright-eyed, ready to show their stuff, head full of pride, and many lessons to learn. The one thing these young guys all have in common, is the goal of one day hoisting that Larry O’Brien trophy high above their heads, and for one moment in time, being the best of the best. Dirk was no different, while his path to the NBA may have been different than most, his intentions were guided by the same shiny ring. The sort of thing that drives champions. 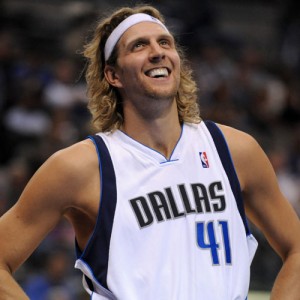 up two games to none on the Miami Heat, before going on to lose four straight, and ultimately losing the NBA Finals in six games. Dirk had also collected about as many personal accolades as any one player could.

He was the NBA MVP during the 2006-2007 season. He (Dirk) made the All NBA team eleven times. Averaged 23 points, 8.4 rebounds and 1 block for his career. Nowitzki is also an eleven-time NBA All Star. Dirk completely shattered Americans perspectives of seven-foot players. I believe that Dirk has completely re-written the book on NBA “big men”. He’s stretched the belief of what a seven-footer is truly capable of.

Not only does Nowitzki possess extraordinary shooting touch and range, he’s able to handle and move with the ball in a way that most considered taboo for a seven-footer before he came a

long. Dirk is also so rare that he’s the first to really excel with this style of play, and he’s generally stood alone up until this point. There have been guys with power forward size (mainly Europeans) who have come along and displayed these abilities to an extent. Guys like Hedo Turkoglu,  Andrea Bargnani and even Lamar Odom all show-case the skills to shoot from anywhere and move well with the ball in hand.

But, none have been able to do so on the same level as Dirk, nor are they able to match their outside game with a consistent inside game. Some critics have called Dirk “soft”. I disagree, I believe Dirk is a capable inside defender. Most players won’t average eight plus rebounds and a block per game for over a decade if they’re scared to bang a little, right? Maybe he isn’t as physically tough as say, Dennis Rodman, but the guy is obviously no Shawn Bradley either.

Finally after a long 2010/2011 season, Dirk and the Dallas Mavericks found themselves ready for the NBA playoffs. Dallas had earned the third seed in the West and would be challenged by the Portland Trailblazers in the first round. The LaMarcus Aldridge led Blazers were a solid team across the board, and many analysts (even this guy) pegged them to upset Dirk and the Mavs, cutting short their playoff run. In hind-sight, t 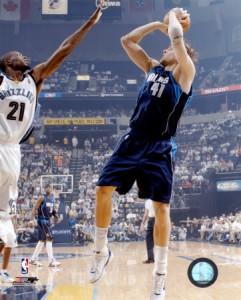 hat notion seems pretty silly. Dallas won in six games and strengthened the belief that they were, indeed, a force to be reckoned with. Next up was Kobe Bryant and the Los Angeles Lakers. Surly a series that Dallas couldn’t win.

The Kobe driven Lakers were the odds on favorite to win the West, and the Mavericks would, no doubt, have their hands full. Dirk and the Mavs took it to the Lakers. Sweeping the favorites and completely embarrassing LA on their own floor. This series got, down right, brutal towards the end. The Mavs would close out the series with a 122-86 victory in Staples Center. We all recall Andrew Bynum’s frustration with the beating Dallas was laying on the Lake-Show. Dallas was quickly proving that they might be the team to beat, period! Dirk’s final challenge in the West would be the up-and-coming Oklahoma City Thunder, and their phenom swing-man, Kevin Durant. The Mavs would yet again, win in convincing fashion, closing the series 4-1.

Dirk had finally done it, after all of the years of hard work, dedication, sweat and tears. Dirk had, yet again, led the Mavericks to the NBA finals, five years after they suffered a devastating loss at the hands of the Miami Heat. Here they were again, facing the same team that gave them a beat-down after going up 2-0. They were to face the same Dwyane Wade that dropped nearly 40 ppg on them in 2006. The biggest difference would be, the Heat now had LeBron James and Chris Bosh. They also had home-court advantage, a reputation for staggering defense and unparalleled scoring ability.

The one thing Miami lacked was Dirk Nowitzki, he made the Heat pay, time and time again. Even when Dirk got off to a slow start, he always seemed to make up for it in the fourth quarter. Something LeBron, Wa 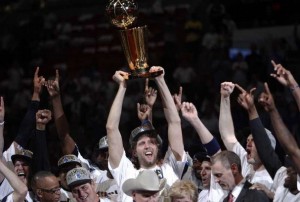 de and Bosh couldn’t seem to answer for. Dirk was the best player during the course of that entire series, and that Translated into the Mavericks winning the NBA Finals in six games, on Miami’s hard-wood. Dirk has now capped his legendary career with, not only an NBA championship, but the NBA Finals MVP award as well. This was a great way to top off the career of a spectacular NBA talent, and one of my all time favorite players. Maybe there’s gas left in the tank for one more run? Only time will tell.