Home / NBA / Does Carmelo have more on the line than LeBron?

Carmelo Anthony versus LeBron James may be the most exciting matchup that we’ll see all post-season. Two tremendous NBA talents go head-to-head with a lot more on the line than just winning a game or a series. 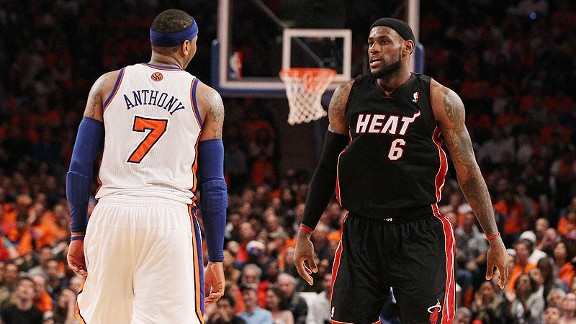 James has to try to piece together the first (of many) championships he promised when he ditched Cleveland for the sunny beaches of Miami. Not one… Not two… Not three… You get the picture.

Carmelo Anthony and the New York Knickerbockers are also in pursuit of the Larry O’Brien trophy. You could even say that Carmelo has more on the line than LeBron James.

This may seem crazy to some considering the scrutiny that LeBron receives on a daily basis. But, Carmelo has become a huge target for haters and Knicks loyal, alike. Playing in New York is no easy task. New York fans will boo their own mothers. They’ve booed Derek Jeter, Brett Favre and Amar’e Stoudemire.

Fans in “The Big Apple” are all about the present. What have you done for me lately? Anthony has done all of the right things as of late. He’s been winning games and rallying his teammates behind his leadership. Madison Square Garden has become Carmelo’s personal stomping ground.

Anthony has the chance to squash the Heats’ resolve for a second straight season.

It just feels like the Knicks will either have to win this first-round series or come pretty darn close. They need to make some noise. Win or lose, they need to battle the Heat until final buzzer sounds. Simply put, they can’t get thrashed.

This has to be a series that leads to the second round, or gives NY fans hope for next season. For the sake of Carmelo Anthony, Mike Woodson, and the rest of this Knicks’ roster, they better play like every game is for the prize.

I expect the Heat to win this series, but believe me when I tell you that LeBron, Wade and company are not happy with their first-round foe. Nobody wanted to draw the Knicks.