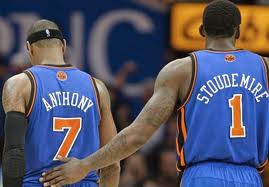 1: Keep the Celtics off the offensive glass. The Celtics grabbed 15 offensive rebounds in game 1. The Knicks will have to hit the boards much harder and limit Boston’s opportunity for second chance points.

2. Keep Rajon Rondo out of the paint. Give the Knicks credit, they kept Rajon Rondo in check for most of game 1. Rondo shot just 5-14 from the field and finished with 10 points. The Knicks dared Rondo to shoot 17 foot jumpers all night and didn’t allow him to drive and create. If the Knicks play this kind of defense on him in game two they will put themselves in a good position to win. If Rondo beats them to the basket they’d be smart just to foul him and put him on the free throw line. Rondo is not a good free throw shooter. He shot just 57% from the line on the year.

3. Knicks need more production out of Landry Fields. Fields played good defense on Ray Allen most of the night, but the only stat he accounted for in 19 minutes of action was 1 rebound. He will need to stretch the floor for the Knicks in game 2 and knock down a few open jumpers. If he can score 10 points it will take some of the workload off of Carmelo and Amar’e.

4. Knicks will need a big game from Toney Douglas. With Chauncey Billups likely out for game two, Douglas will be a huge player to keep an eye on.  Douglas is not the floor general that Billups is. I do think Douglas can bring an aspect of his game that Chauncey doesn’t have. Douglas is a better defender and has shot the ball better as of late. If Douglas catches fire and knocks down a few threes it could be a major swing in the Knicks’ favor. WILD CARD: Expect to see a lot more of Anthony Carter. His playoff experience could help with Knicks late in the game. With lack of depth at the PG position now with an injured Billups, you could see Carter make an impact in the game.

5.  Carmelo needs to have a bounce back game. Melo shot just 5-18, including 2-8 from down town, and finished with 15 points. I expect to see Melo have a big game in game two. He played good defense on Paul Peirce for most of the game, but picked up two quick fouls just under two minutes in the first quarter. Melo also turned the ball over 5 times in game one. I expect nothing less than a big night for Carmelo in game two.

6. Feed the hot hand. Amar’e Stoudemire led the Knicks with 28 points in game 1, but the ball never seemed to find his hands late in the game. Whether it be Amar’e or Melo the Knicks need to get the ball to whoever’s shot is falling.

7. Continued production from the Knicks’ bench. The Knick bench outscored Boston’s 23-8 in game 1. The Knicks will need all the help they can get from their bench in game two. Look to see Shawne Williams, Bill Walker and Anthony Carter get heavy minutes off the bench.