Sources close to the situation have reported, early Friday morning, that Lawrence Frank will become the new Head Coach of the Detroit Pistons. Frank reportedly beat out former Pistons assistant coach, and former Atlanta Hawks Head Coach, Mike Woodson. Espn had reported last week that the Pistons’ search had been narrowed down to Woodson and Frank. Though Woodson seemed to be the preferred choice of Joe Dumars, Frank was said to have wowed the Detroit executives during his interviewing process. 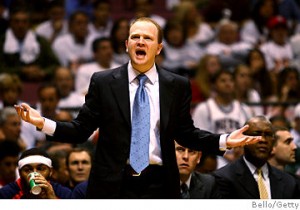 Lawrence Frank spent 7 seasons as the head gun for the New Jersey Nets, and more recently spent last season as an assistant coach of the Boston Celtics. Frank never really managed to thrive in his head coaching gig in New Jersey, amassing an abysmal 225-241 record over the course of his tenure. However, Frank did manage a 49-33 record back in the 2005/2006 NBA season. Frank’s biggest problem could be his age. At just 39 years old, demanding respect from a veteran club, such as the Detroit Pistons, could take some work. Toss in the fact that the Pistons aren’t winning many games with their current roster, and it would be easy to see how Frank may get off to a rocky start.

It’s hard to argue against this choice though. Detroit fans may not be particularly happy with the coaching selection. I’m sure, like most fan-bases, they were gunning for a proven, more experienced Head Coach. But, the reality of the situation is that the current state of the Pistons roster wasn’t drawing many big named suitors. Phil Jackson wasn’t going to all of a sudden decide to hold off another season before retiring, and give the Detroit Pistons a shot. It’s a tough business, and just like it’s hard to bring in stud players to a failed organization, it’s just as hard to land coveted coaches.

I feel that Frank is the safe choice, because he’s easy to blame if things keep going awry. There is a flip-side to this coin, Frank could be just what the Pistons have needed. A young, fired up guy with a huge chip on his shoulder. He’s also going to be a lot cheaper than other bigger named coaches out there. Lawrence Frank is going to have big expectations to revive to dormant Pistons club back to the success they tasted during the early part of the century. Frank will have the benefit of lowered expectations, as nobody in their right mind expects the Pistons to be making a run anytime soon. He may also be looking at extended time to prepare with the ugly reality of the lockout still looking like it’s here to stay.

Frank’s first order of business will, no doubt, be to figure out what to do with his 14 wing players, and lack of worth-while players at the 4 and 5 positions. In my mind, you have to try to move Rip Hamilton along to another team, give Ben Gordon and Charlie Villanueva max minutes to try to make sense of the big money spent on them in free agency, and figure out what to do with Rodney Stuckey. Greg Monroe could prove to be a nice asset in the trade-game, or a future star for the Pistons team. Only time will tell with that. I think the Pistons could be on the right track, finally, with the hiring of Lawrence Frank, and we could see nice things from them in the future.