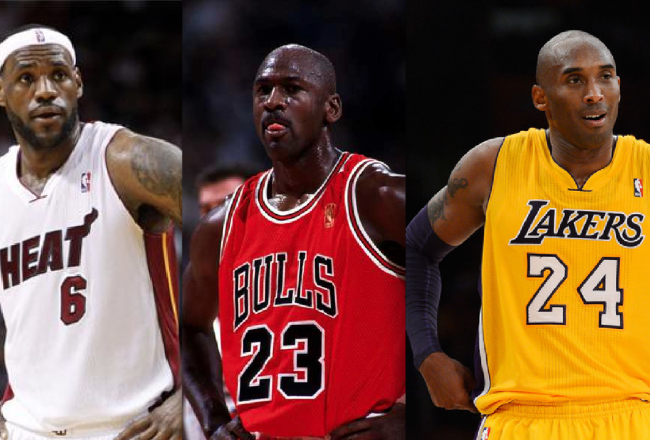 It didn’t take long for LeBron James and Kobe Bryant to respond to the great Michael Jordan and his claims that he would not only beat them in a game of one-on-one, but a slew of other players from this current era as well. Jordan, who seems as confident and competitive as ever, said that Kobe Bryant may be able to beat him, but only because “he stole his moves.”

LeBron caught wind of the Jordan comments and said “It was a good promotional thing.” James said it was good for the NBA to talk about who would win between the two, but shot down the chance of it ever happening.

From the Bahamas, where video games were the big topic, LeBron James shrugged off comments made by Michael Jordan that Jordan could beat James in a game of one-on-one.

“It was for my game?” James said of Jordan’s comments. “It’s a good promotion thing.”

James said “absolutely” he’s thought about a matchup with Jordan but “no one will ever see it and it’s not going to happen. But it’s good for people to talk about … M.J. said that?”

Something tells me that the uber competitive Michael Jordan could still hold his own against these guys. LeBron may be too much right now as he is hitting his prime and playing the best ball of his life. But would you count Jordan out?

Kobe Bryant on the other hand, tweeted out his thoughts on the subject.

Only “some” of his moves Kobe? I’d be willing to bet a lion’s share of Bryant’s moves were either copied or spawned from MJ. I suppose we’ll never get to see these one-on-one battles take place. However, MJ has recently played young players in the NBA, such as O.J. Mayo and Michael Kidd-Gilchrist, so if these current stars were up for the challenge, maybe we could see it happen. I’m not going to get my hopes up though.