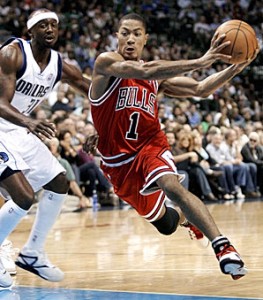 talent from the Indian Pacers. We know that both of these clubs use defense as a staple to their game-plans but, the Pacers lack the offensive effectiveness to keep pace (pun intended) with the Bulls over the course of a seven-game-series. While i don’t believe Indiana will get swept, i do believe they will drop the series in five games.

Danny Granger is the Pacers key guy, and he’s averaged close to four points less per game this season (24.1 in 2010 to 20.5 in 2011), add in the fact that Chicago took the season series 3-1 and you’ve got all the makings of a boring five games, filled with Derrick Rose making the Pacers look like a grade schoolers. The best shot Indiana has of winning this thing, is if Derrick Rose breaks his leg. Even then, I’d wager on Chicago to take the series. The scary part is, Rose seems to be getting better and playing harder as the season winds down. If this guy kicks it into overdrive for the playoffs… Look out!

The 76ers couldn’t muster a victory over Miami during the regular season, and I’m not inclined to believe they will do anything differently in the post-season. Philly is a half court  team, they like to slow down the pace, take their time and play half-court basketball. The Heat are a slow team’s worst nightmare. Lebron James and Dwayne Wade are two of the best open-court pl 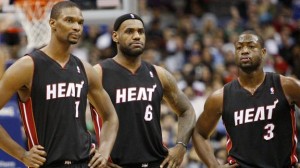 ayers alive(not to mention two of the best player alive, period) and they will capitalize with fast-breaks and quick buckets all series.

I like what the Philly brass has tried to do, by building a traditional team with solid role players. They just won’t have enough for Lebron and company this time. I still believe “The Heatles” will fall short this season, just not against a team who is barely .500. Philly gets swept and heads back to the drawing board. They can at least walk away with piece of mind, they did manage to make it this far.

I’ve heard Knicks fans, relentlessly jabbering on and on about how the Knicks are going to beat Boston. It’s crap. Don’t buy into the hype on t 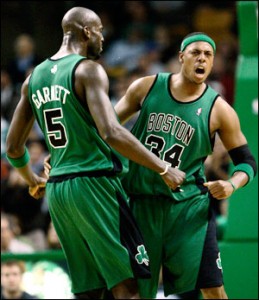 his one, It’s a poor investment. This happens almost every single season. Some bottom seed makes a dramatic end-of-the-season push or makes a deadline move that betters their team in the long-haul, and the masses start going crazy about how they’re going to slay giants. Is it possible for the Knicks to beat the Celtics? Sure, anything is possible.

It’s also possible that Megan Fox has a thing for me. Is it likely? I’d say no. The point here is, experience, depth and defense. Boston has all three. Paul Pierce will do his job on Melo, Rondo is going to give, the older, less agile, Billups, trouble. Amare will be tested inside with Boston’s bigs.

I’ll kind of give the Knicks the experience nod (B 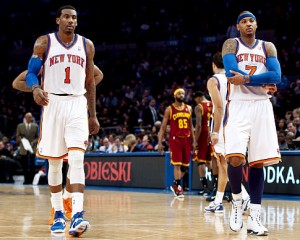 illups, Melo, Amare). But, They (The Knicks) have zero depth and they play absolutely zero defense. Also, don’t think for one second that Doc Rivers won’t out-coach Mike D’Antoni, because he will, all series long. I’m not a Knick-hater, I’m just trying to be realistic. The Knicks aren’t ready. They need to add some depth and possibly another key player. When they do, they could be VERY fun to watch.

This may be the most closely matched saga we’ll find in the first round of the Eastern Conference. Orlando punished Atlanta last season in the second round of the playoffs, sweeping them 4-0, by an average of 25.3 points per game, the greatest ppg differential in a four-game sweep in league history. But, this season is a different story. The Hawks boast the season-series at 3-1 over the Magic. The Hawks will be looking to ride the scoring abilities of both Joe Johnson and Al Horford, wh 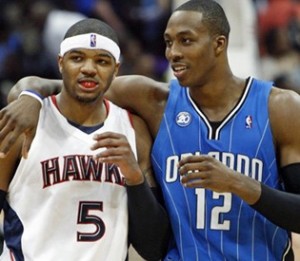 ile Orlando will be looking to establish Dwight Howard on the block and knock down open threes.

I think Orlando wins this series because I believe they’re the better team, despite the season-series. The Magic also have the best player in the series, in Dwight Howard, and that tends to make the difference in big games. Sources say that J.J. Reddick should be ready for the home-opening on Saturday. Reddick has been a much-missed piece to the Orlando puzzle. Josh Smith is normally a good barometer for the Hawks. His level of intensity and hustle can often dictate a game. Smith should be an interesting story-line during this first-round matchup.