Home / NBA / Russell Westrook has surgery, out at least a month 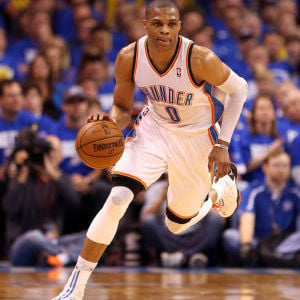 Russell Westbrook will miss 4-6 weeks to start the season

Poor Kevin Durant. After losing his running mate, Russell Westbrook, during last year’s Western Conference first-round against the Houston Rockets, Durant had to carry the load. Well, it looks like Durant will be carrying the load again, at least for the first 4-6 weeks of the NBA season. Westbrook had arthroscopic surgery on his right knee Tuesday morning and may be out until mid December.

More than five months after point guard Russell Westbrook tore the meniscus in his right knee at the start of the Thunder’s playoff run, he underwent arthroscopic surgery on the same knee Tuesday morning and is expected to miss the first four to six weeks of the regular season that starts Oct. 30.

At least the torn meniscus has healed and missing the first 4-6 weeks of the season shouldn’t set the Thunder back dramatically. Plus having the surgery now, should allow Westbrook to be fresh during the middle of the season, when back-to-back games set in and teams start to get tired.