Home / NBA / The Knicks failure to close out games.

The New York Knicks have pushed the favored Boston Celtics to their limit in two close losses in their first-round Eastern Conference matchup. In game one, a questionable offensive foul call on Carmelo Anthony gave the Celtics the ball with ten seconds remaining, and Ray Allen drained the game winner on the ensuing possession. In game two, Anthony poured in 42 points and snatched 17 rebounds, and that was still not enough as the Knicks fell 96-93, with Jared Jeffries turning the ball over on their final possession by foregoing a layup and looking to make the extra pass.

So I ask, what is it about the Knicks that makes them self-destruct when the fourth quarter clock reads 2:00? There was inconsistent officiating in game one, this is true. But that doesn’t excuse how the Knicks blew a twelve point halftime lead, why Carmelo Anthony shot 5-18, why Amare Stoudemire didn’t touch the ball on their final seven possessions when he was carving the Celtics up, or why they allowed an inbound alley-oop dunk with a three-point lead with 37 seconds left, stretching the game longer and ultimately allowing the Celtics to steal the win.

In game two on the Knicks final possession, Carmelo Anthony was double-teamed, at which point he found a cutting Jared Jeffries. What should have been an easy, go-ahead, layup (if Jeffries went strong to the rack( turned into disaster, as he bobbled the ball then looked to pass, practically giving the ball to Kevin Garnett, who had rotated over.

Both teams have immense amounts of offensive firepower. However, I must attribute the Knicks inconsistency late in 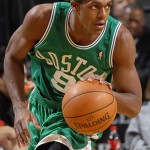 the game to coach Mike D’Antoni. First, Celtics 6-1 guard Rajon Rondo, not exactly known for his scoring prowess as he isn’t an impressive perimiter shooter, had 30 points. The majority of these buckets came on layups. At what point does D’Antoni realize Rondo isn’t being contested by Toney Douglas, who was in foul trouble? Why did he not take Jeffries, a strong defender, and put him on Rondo near  the free throw line, not allowing him to get into the paint and make one of his acrobatic layups? Jeffries, being the taller and stronger defender, would have been able to contest Rondo much more, not allowing the easy baskets. When Rajon Rondo scores 30, regardless of the Knicks injuries or whatever else happens, it is highly doubtful they will win. They need to find an answer in that aspect, as it shows how one coaching move not made can dramatically effect the outcome of a game.

On the final possession for the Knicks in game two, everyone in the building including D’Antoni knew Melo was going to be double-teamed. How they did not come out of the huddle with a play designed to get Melo open via double screen, or draw up a play to get Douglas or sharpshooter Roger Mason, Jr. open for a three-point attempt, is beyond me. Jared Jeffries is not the guy you want with the ball in his hands with the game on the line, and it showed why when he turned a layup into a turnover. Not saying the pass by Melo was wrong, Jeffries was open. But that is certainly not the ideal final attempt the Knicks wanted, and they suffered another heartbreaking loss. 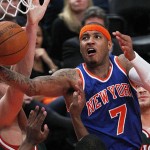 Carmelo Anthony showed up in a big way, and game two proved he cannot do it all by himself. He carried the Knicks in every sense of the word, however a mental lapse with 4 seconds remaining allowed the Celtics to run the clock to 0.6 seconds, as he did not foul Delonte West on the inbound. The rest is history. Look for the Knicks to address these inconsistencies going into a must-win game three. If they continue these mental breakdowns and coaching woes late in games, the first three and a half quarters of great basketball do not matter, and the first two games of this series show this is evident. This series has been an exciting one so far, and the Knicks do not want to lose 4-0 with four close, hard-fought losses. Should they properly correct their late game mistakes, look for them to make a push towards evening this series up as it heads to Madison Square Garden.