The Boston Celtics are the most storied franchise in the history of professional basketball. When I chose to do this list, I had to take into account not only statistics, but what era each player played in, his supporting cast, and overall success of the team. Obviously there are going to be those who disagree with the players I chose, as well as where they rank. I could have chosen to cop-out and do a top ten or top twenty list, but the top five is where it’s at. So without further commentary, here are my top five Boston Celtics of all-time:

5) Bob Cousy: Cousy is considered the first master of court vision, and the first bigtime 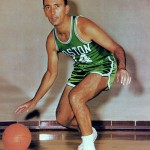 playmaking guard. At the time, his ball-handling skills were beyond any other players at his position. It almost appeared as though he was ahead of the 1950’s era in which he played. The Celtics won six titles with Cousy at the helm. His career stats as a member of the Celtics: 18.5 points and 7.5 assists per game.

4) Paul Pierce: Pierce, nicknamed “The Truth”, has the been 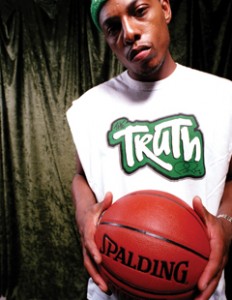 the face of the Celtics for over a decade after being drafted out of Kansas in 1998. What I like about Pierce is that he stayed with Boston even when surrounded by mediocre players and losing teams for the first part of his career. His loyalty was rewarded when the Celtics brought in all-stars Ray Allen and Kevin Garnett before the 2007-2008 campaign, forming the “Big Three.” They won the NBA title in their first year together, and have made deep playoff runs, led by Pierce, each season since. His career stats in Boston: 22.5 points, 6.1 rebounds, and 1.2 assists per game.

3) John Havlicek: Havlicek was a trend-setter at 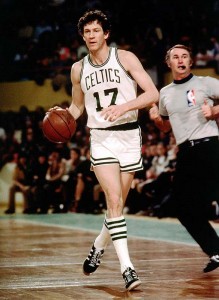 guard, being one of the first to take twenty or more shots a game. He is the all-time leading scorer for the Celtics, and was also a defensive standout. Havlicek led his Celtics teams to eight championships, and his impact on the guard position paved the way for what we see on the court today. Career stats: 20.8 points, 6.3 rebounds, and 4.8 assists per game.

2) Bill Russell: Bill Russell was a man ahead of his time, possessing instincts and intangibles that aren’t see very often, even today. His shot-blocking ability was uncanny, but unfortunately blocks weren’t a recorded statistic during Russell’s time. An argument can be 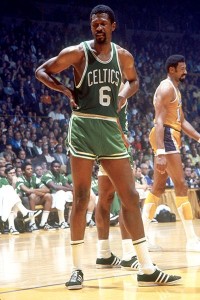 made for Russell as the best Celtic of all time, as he led the team to eleven (count them, eleven) championships. Career stats: 15.1 points, 22.5 rebounds, and 4.3 assists per game.

1) Larry Bird: While Bird won far-less championships (3) than his counterparts on this list, he played in an era of emergence in the NBA. His competition was much tougher when he played than any of the other players in the top five (with the exception of Pierce). Going up against players like the great Michael Jordan and Magic Johnson night after night, it was impossible to reign in title after title, but he kept the Celtics competitive and playoff-bound almost every season for a decade. His IQ as a player was 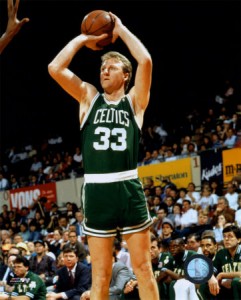 extremely high, always in the right spot at the right time, and he was a true inside-out scorer. There aren’t many 6 foot 9 players who could shoot the three like Larry Legend. The argument will always come down to Bird or Russell as the best Celtic of all time, but I give the nod to Bird here. He came within 3.7 assists of averaging a triple-double during his tenure. Career stats: 24.3 points, 10.1 rebounds, and 6.3 assists per game.