Around the sports world Boston is currently Title Town USA. Since 2001 they have won three Super Bowls, two World Series, one Larry O’Brien Trophy, and a Stanley Cup. That’s seven championships combined by four major sports teams in the same city in one decade. Now I’m not here to kiss Boston’s rings as Rex Ryan would say, but rather to find out what teams may have similar success. It’s rare to find a town, city, or state that has four major sports teams all winning around the same time. Some states don’t even have multiple professional teams. Like Pittsburgh doesn’t have a basketball team. But those teams won’t be punishable. To get on this list you need to have two teams that are contenders at this point. You may also have an up and coming team. I think the up and coming teams just add into the title town factor because they’re on the rise.

Detroit has had some sports success from 2004-2006 with the Pistons and Tigers, but until now there has been a little bit of a drought. The Pistons are the only Detroit team that will not have success in the next few years, the rest of their major sports look good right now. The Red Wings are always contenders for the Stanley Cup. Hockey seems to be the Motor City’s sports, or was that because their other teams weren’t as good? I’m not sure, but hockey town USA still loves their Wings. They’re 2-0 with 4 points early in this NHL season trying to make a run at the Stanley Cup.

The Tigers are currently in the ALCS. Down 2-0 to the Texas Rangers, but still have a shot to make it to the World Series. The Tigers have a young pitching staff led by Justin Verlander, Max Scherzer, and Doug Fister. Add in hitters like Miguel Cabrera, Victor Martinez, and Delmon Young and you have enough offense to go along with a solid staff. The Tigers should be a great team for years to come. I see them having similar success to the Minnesota Twins at the top of the American League Central. The Tigers will actually get out of the ALDS though.

Lastly I have to add in those lovable Detroit Lions. How can you not? People were saying this team is on the rise, but did anyone think the Lions would start out 5-0? I didn’t. The defensive line is crazy could led by Ndamukong Suh. They just knock the QB down, but they also have a nice secondary. Louis Delmas, Chris Houston, and Eric Wright are not really looked at by the rest of the league. On the offensive side of the ball they have Matt Stafford, Calvin Johnson, and Jahvid Best. I remember people saying Mark Sanchez was the QB of that class and I laughed. Give Stafford time and look what happens? The kid is putting together a fine season and has a couple of giant second half comebacks. You might want to look out for the Lions this year, because they’re for real. Add in Michigan and Michigan State, and you have a solid sports state.

Everything’s bigger in Texas right? Jerry Jones, Nolan Ryan, and Mark Cuban have built respectable franchises over the years. Lately the Dallas Mavericks and Texas Rangers have been the talk of the Dallas Forth Worth area while the Cowboys play their mediocre style of football. The Mavericks finally won an NBA Championship last season after years of contending for a title with nothing to show for it. Dirk Nowitzki and Jason Kidd, two NBA greats finally got their rings. Now will this team be a force in 5-10 seasons? Probably not, but who knows with the marketing genius of Mark Cuban. They did defeat the Miami Heat.

While the Mavs are already aging, the Rangers are a very young ball club with a lot of minor league resources. They won the American League pennant a season ago and are on pace to do it again up 2-0 on the Tigers in this years ALCS. They have one of baseball’s most powerful lineups combined with a solid starting five and a great bullpen. That’s the formula for the Texas Rangers and it’s working. They are slowly becoming one of, if not the most feared team in baseball.

Then we have the Dallas Cowboys. One of the most talented teams in the NFL, but just can’t seem to close out games. That’s just the thing with them. I expect within three years this team to have it’s act completely together. They’ll have a young and experienced offensive line. As of now it’s just young, and hopefully for them Rob Ryan will stick around long enough to instill a defensive culture. 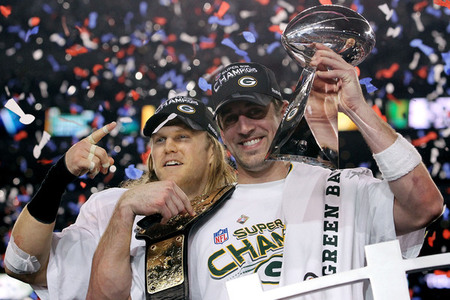 Wisconsin doesn’t have a hockey team or a very good basketball team, but the Green Bay Packers and Milwaukee Brewers could carry this state alone. Green Bay gets the nickname title town and put their success with the Brewers success this season and you have a nice nucleus there in Wisconsin. Don’t forget how well their college football and basketball programs have been playing. The Packers won the Super Bowl last year, and having the NFL’s best current player they could very well repeat. This is a really young Packers team. They won the Super Bowl with many of their key players on injured reserve. It just shows how much depth this team has at every position. Last Sunday Night Green Bay was down 14-0 to the Atlanta Falcons, but came back to win 25-14. They’re offensive line lost another key piece, but Aaron Rodgers was still able to bring his team back. I have them returning to the Super Bowl this season because they do what championship teams do.

The Brewers are young, but if they don’t manage their money correctly could be out talent fast. Prince Fielder is planning on leaving this off-season, but in 2013 Zach Greinke and Shaun Marcum are scheduled to become free agents. Leaving them with just Ryan Braun and Yovani Gallardo as their key players once again. For the next two years though they have a shot to win the World Series. Really now is their time and I’d say their in good shape. Even if they are only tied in the NLCS at 1-1.

If the Packers and Brewers were to win championships in the same year (or Mavericks and Rangers) then they deserve the title of Title Town USA.

Yes I know these are states not towns, but “Title States” sounds stupid.