Browns’ linebacker Scott Fujita was suspended for the first three games of the 2012 season after the league ruled he played an integral role in the Saints bounty program. According to the league, Fujita put money into a pool in order to encourage teammates to intentionally injury opponents. Fujita believes the NFL does not have significant evidence against him. In fact, he believes the NFL is lying and trying to publicly smear his name.

“I’m not saying the NFL is intentionally lying,” Fujita said in an interview with The Associated Press. “I’ve been willing to give them the benefit of the doubt that they may have just been working with the information they’ve been given, even though much of that information was inaccurate and lacked credibility.

“It’s their cavalier interpretation of everything that’s been way off. They clearly proceeded with a public smear campaign with very little regard for the truth.” 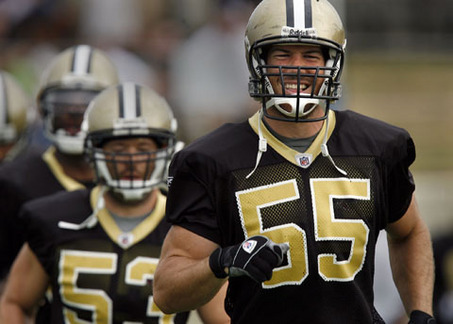 Fujita also argues that he would never contribute money to encourage others to purposely injure other players. The Browns linebacker knows the damage football can do to the body:

“I’ve had a few concussions myself. I have a dear friend [former Saints teammate Steve Gleason] who has ALS. I have a friend and former mentor [Lew Bush] who died earlier this year. Then there was the tragic death of someone I’ve admired for so long, Junior Seau,” Fujita said. “I can’t say for sure that all of these things happened because of football, but I’ve seen enough to have some concerns. I was elected to fight for these men, so in no way do I regret that.”

Furthermore, Fujita cites his work advocating player safety as one more reason why he would never participate in an injury pool. Despite the lack of evidence it does not look like Fujita or any of the other players suspended as a result of the bounties are going to get reinstated any time soon. Roger Goodell tends to not back down and this looks like another case where he will stick to his word.