Home / NFL / Chipper Jones is Named to the All-Star Team 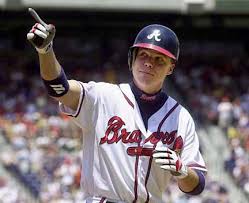 In the final season of his soon-to-be Hall of Fame career, Atlanta Braves star Chipper Jones has been named to the National League All-Star Team. As Jon Morosi of FOXSports.com reports, Jones will be the replacement player for Matt Kemp, who is out due to injury. Chipper Jones was listed among the final “fan vote” players, but now, Braves and MLB fans no longer need to worry about whether the classy Jones will appear in the “Summer Classic.” This is well deserved, as Chipper Jones has proved to be the face of the Atlanta Braves organization during his 19-year career. Hats off to Chipper Jones. This is must see TV.

Chipper Jones has been named to the All-Star team as an injury replacement for Matt Kemp.