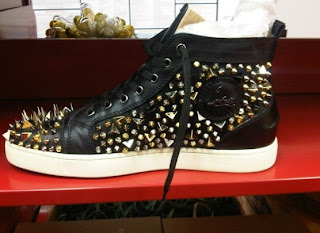 Cornerback Yves Batoba tweeted that someday he would own a pair of Louboutin shoes like Ochocinco. Well Chad Ochocinco (or whatever name he goes by now a days) tweeted him back saying:

What size are u kind sir, i get them free can help you with a pair RT @Ybatoba: Someday I’ll get on my Louboutin shoe game like @ochocinco

Yves Batoba tweeted back to Ochocinco,

@ochocinco man if I wasn’t afraid of that being an NCAA violation, I would. They’ll get u for anything nowadays

I don’t know if this is refreshing to see an athlete turn down a free pair of shoes and stay true to the law of the land, or completely asinine that a student athlete can’t accept a nice gesture by a star ball player. Either way big ups to Chad Ochocinco for the kind offering.