Home / NFL / Danny Amendola’s Injury Could Have Been Much Worse 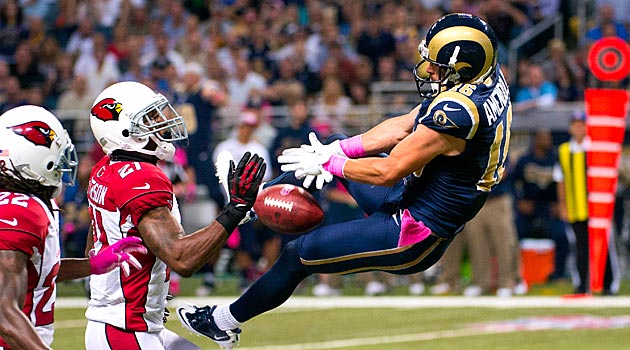 By now, we’ve all heard of Danny Amendola’s injury that will keep him out of the lineup for an extended period of time. He is a big part of what the Rams offense does, and is also a big player in the fantasy football world.

Now, news is coming out that the injury he suffered could have been much worse. As in, life threatening.

According to Yahoo!, Danny Amendola’s injury was extremely rare, and even could have ended his life:

During a report on FOX’s pregame show, Glazer explained that Amendola dislocated his clavicle, which actually popped in and could have threatened Amendola’s trachea and aorta. The Rams’ medical staff acted quickly, putting Amendola to sleep before popping the clavicle back into place and making sure it could not dislodge again.

Glazer adds that the Rams have called around the league to find a case of another player suffering a similar injury, but they could not find one. The absence of a case study for this particular injury makes it difficult for the Rams to know when Amendola might return. Though surgery is not required, it may take between four and eight weeks for the injury to heal to the point where Amendola can play.

Of course, with this in mind, it is great news that Danny Amendola is OK. He’ll miss at least 4-6 games, but the long-term prognosis seems alright.

This could have been absolutely tragic, had the Rams training staff not acted quickly enough. Could you imagine an NFL player actually dying on the field?

We’re all glad to hear that Danny Amendola is now OK, and that he is expected to recover.