After reading that the classless Bill Romanowski called Denver Broncos quarterback Tim Tebow “the only virgin in the NFL”, I got to wondering: where does all the hatorade people are sipping on Tebow come from? Apparently armchair QB’s criticizing his play isn’t enough, he is mocked and poked fun at because of his religious beliefs.

First, the Detroit Lions mocked Tebow’s praying after sacking him. Now Romanowski makes this intelligent comment, and although I would expect nothing less from a career meathead, it is still unacceptable. When I see Tim Tebow, I see a kid who has a contagious fire for the game he loves, and is also an upstanding citizen with strong beliefs and high moral character. He is the definition of what a role model should be. I cannot fathom why people are attacking him when the behavior of so many other NFL players is ridiculous. 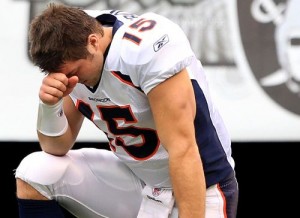 Bottom line remains, Tim Tebow is 2-1 since taking over the starting job. People want him to play the traditional pocket QB, and downright refuse to believe his style of spread offense can work in the NFL. Apparently winning two games doesn’t count for anything. Tebow ran the ball for 117 yards, and passed for two touchdowns in the Broncos win over the Raiders Sunday. It is amazing what happens when the coaching is geared towards what Tebow does well, and he isn’t forced to play the prototypical quarterback. Throw in the fact that everybody on the team steps their play up around him, and I don’t care what those who want to analyze mechanics while ignoring the positive elements of his game have to say about it.

The paradox here is when Tebow continues to be successful and gets the last laugh, I can guarantee you he would not laugh. He would not boast. He would not even say “I told you so.” That’s the Christian part of him shining through. He would go about his business because I’m sure in his heart he knows he will make it, and doesn’t care what his critics have to say. To that, I say good for him. Last time I checked, results are the only thing that matters, and Tim Tebow is 3-3 overall as an NFL starting quarterback.

Six games are not nearly enough to base the future potential of a player. If we were basing Peyton Manning off his first NFL season, he wouldn’t have even gotten a second chance. So it is unfair to judge Tebow so quickly just because people want to hate him for no good apparent reason. I don’t buy the reasoning that the media over hyped him as the reason for all this nonsense, that just shows that anyone who feeds into that is unable to form their own opinion. It is the job of the media to do these things, and certainly not Tebow’s fault.

So I say to all you “experts” who feel the need to criticize this young man for what he does on and off the field to…shut up! If anything, be happy there is a player of Tebow’s moral fiber in this league full of criminal conduct, flashy cars, and selfish diva players.

Nothing upsets me more than ignorant people wanting a good person to fail, and for absolutely no reason. He is a breath of fresh air, an exciting player, and if he won’t tell you “I told you so” when he succeeds, I will surely do it for him.