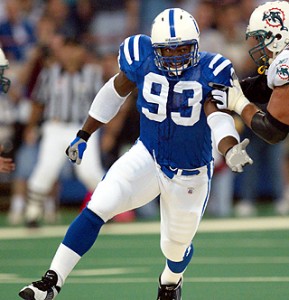 Normally, financial advisers are the ones you depend on to help efficiently manage your funds, especially NFL players who usually possess large amounts of cash.

According to reports from TMZ and Black Sports Online, $2.2 million dollars has been stolen over a period of time from Freeney by his financial advisers. The complete details from TMZ and BSO are below:

According to the Federal complaint — obtained by TMZ — Eva D. Weinberg and Michael A. Stern were busted late last week after a lengthy investigation revealed how they “conspired to defraud victim D.F., a professional football player.”

The feds claim Weinberg and Stern did major damage between May 2010 and October 2011 — making $2.2 million in fraudulent transfers from Dwight’s accounts to Arms Reach Consulting — a company controlled by Stern.

Let this be a lesson. Don’t trust anybody, and never get too busy to manage your loot.