The Eagles “Dream Team” continues to add big names with no apparent regard for money or much or else. Ronnie Brown is the newest 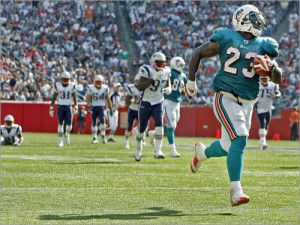 member of the Miami Heat of the NFL. He’ll probably be relegated to spot duty at about 10 touches a game. But it certainly helps to have a reliable veteran when your starter is a just over 200 pounds. He may also get looks in the goal-line packages. Brown has shown that he still has quite a bit left, so this signing is not to be taken with a grain of salt. The Eagles are inarguably the favorite in that division and maybe the entire NFC. Rob Ryan may be spouting his mouth off in the lone-star state, but I don’t think that will last for long. The Eagles may just steamroll the East, so long as Jeremy Maclin and Desean Jackson are healthy and happy.

Down south, somehow the best free agent nose-tackle, Aubrayo Franklin, goes to the New Orleans Saints. This after they had already signed Shaun Rogers to play next to Sedrick Ellis. I don’t know what kind of packages Gregg Williams is dreaming up, but it’s going to be scary. They’ve got three monsters in the middle now. Running lanes are going to be awful tight in the Big Easy. Couple that with their blitzing tendencies and run-up-the-score style, and the Saints may have slid back into contention for the NFC themselves. This move should separate them from the Bucs and Falcons in the early season betting lines.

Franklin excels in eating up blocks and letting linebackers make plays. Just ask Patrick Willis. He’ll do just that in New Orleans, allowing Big Baby Rogers and Sedrick Ellis to pin their ears back, shoot gaps, and chase quarterbacks.  My question is how stupid is the rest of the league to allow this guy to be signed on a one year deal? As many teams as there are playing the 3-4 or simply getting run all over, you’d think a top-shelf nose-tackle would be in demand.  Nope, apparently not. I bet a good chunk of teams will regret letting this happen. Unless, Franklin simply shunned them to go for a ring. If that’s the case, he may get his wish.

The Eagles better run sweeps if they see New Orleans. The middle will be clogged.

Update: This is getting out-of-hand. Just as I finish writing about one Eagle signing, another happens. Right Tackle Ryan Harris is the newest member of the “Dream Team.” He’ll surely replace the underachieving Winston Justice. This is a monster upgrade on the blind-side for the left-handed Mike Vick. I think you’ll see the difference in his numbers and his health. Harris also more athletic than Justice, allowing the Eagles to design more stretch plays going that way. The main weakness last year was this team’s offense line and it has been totally revamped with first round Fireman Danny Watkins, Evan Mathis, and now this. It’s pretty incredible that they’re able to just stockpile talent like this. Andy Reid has to be feeling pretty good about this roster.