It’s time for some ethical behavior in sports. And it’s on the Jacksonville Jaguars. It’s now clear that they are once again a very far cry from being competitive. Their top wide-out is Mike Thomas and they’re starting Luke McCown at quarterback. That’s not the makings of a good team. 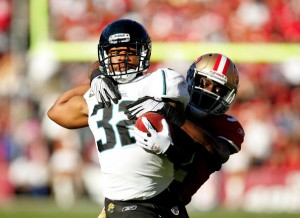 And there sits a 26 year old Maurice Jones-Drew. Looking at that offense around him as the prime years of his career blend into obscurity. If it weren’t for fantasy football, it would probably be hard to even remember the guy 5 years from now, at this pace.

And that is no fault of his own. He’s a monster (when healthy) and has shouldered more of the weight of his offense than perhaps anyone else during his time in the league. So what I say is trade the guy to a contender before the deadline. The San Diego Chargers make sense if Ryan Mathews doesn’t progress. The Atlanta Falcons if “The Burner” doesn’t find his footing. Somewhere. Anywhere is just about better than Jacksonville. Playing in front of 20,000 senior citizens and not even getting coverage on the highlight shows.

This is a rude way to treat a Pro Bowler. So set him free for a 2nd round pick, maybe make it conditional depending on his games played or something. But somebody will bite to put them over the top. And in this new era of reasonable contracts in the draft, the picks take on an entirely new value. If Jacksonville is minus Mo-Jo, they’d almost certainly be in the top 5 picks. For that, they’d get a king’s ransom from some quarterback-hungry team. Getting Matt Barkley or Andrew Luck at $4 mil. a year is going to be pretty enticing to GM’s.

Rebuilding is not going to get done by getting 5 wins. Might as well settle for 2 and put some experience under Gabbert’s belt. That would also allow Gabbert to become one of the bigger voices in the locker room. They could go pass heavy and better evaluate for the future. Take fliers on guys and run trick plays. Anything would be more interesting than being so damn mediocre and boring before losing in the 4th quarter. Now without David Garrard, those losses may be cemented by the half.

So, for the good of the game and for the future of the team: get aggressive in the rebuilding, Jacksonville. You’ll thank me when you’re sitting in the catbird seat of one of the most highly touted quarterback draft classes in quite some time. And, we could remember Maurice Jones-Drew’s career.