During last night’s Sunday Night Football game against the Green Bay Packers, Giants TE Martellus Bennett had three receptions for 44 yards on the field, but it was his fourth reception of the night that sent a man home safely.

After the game was over, Bennett was heading to the locker room when he threw his gloves into the stands for some young fans. 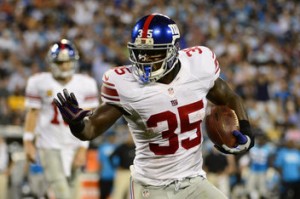 An adult male fan reached over and tried catching the gloves as they were falling short of the stands, and the momentum from his reach sent the man over the railing, falling towards the ground at Metlife stadium.

Bennett was quick to react and caught the man before falling to the ground, like any superhero in a big city would do.

“I just did what any super hero would do, saved his life,” Bennett said via Newsday. “I’m like Scott Summers [Cyclops from the X-Men comics].”

He said his initial reaction was watching the man fall, but stepped in to make the catch.

“My first instinct was to step back, like ‘Oh —!'” he said. “But I did the righteous thing so I caught him and slowly tried to put him down but I tripped over somebody and we all fell. I’m just happy I could help someone out.”

It’s good to see Bennett having a sense of humor over the catch, if he had not made it he might have been singing a different tune.

Bennett left the game in the fourth quarter after taking a hit to the chest that he said knocked the wind out of him, but thankfully he was there to help the free-falling fan after a Giants victory.