According to a report from Joe Buscaglia of WGR 550 sports radio in Buffalo, there is another player that Bills fans can add to the list of potential players to be drafted with the #10 pick at the NFL draft tomorrow night. The Bills have reportedly shown great interest in Mark Barron, the stud safety from Alabama

In this draft, the Bills have A LOT of options at number 10. Some of the players they have been connected to include Michael Floyd (WR, Notre Dame), Luke Kuechly (LB, Boston College), and South Carolina cornerback Stephon Gilmore. 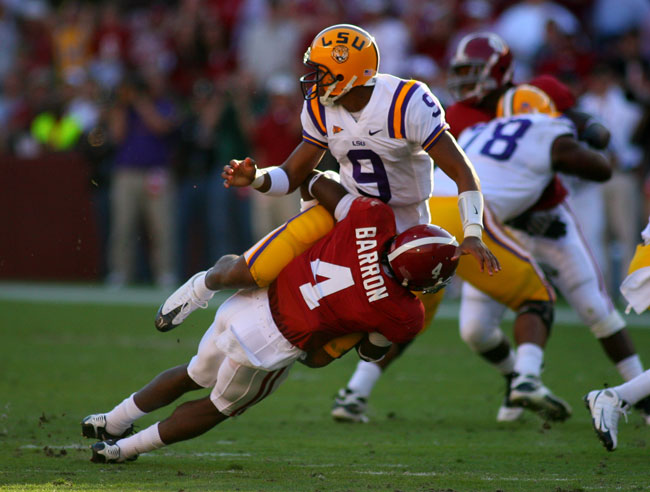 Could Barron, the hard hitting safety, be the missing link?

According to an anonymous league source, though, the Bills see Mark Barron as a “playmaker” and a “day-one starter” and are extremely interested in adding him to their defensive scheme.  He would join a defense that has already added playmakers Mario Williams and Mark Anderson this offseason, but little has been changed regarding the secondary. Barron has been considered by the Bills because he can match up in pass coverage with division-rival tight ends Rob Gronkowski and Aaron Hernandez in New England.

Barron entered the NFL combine at 6’1″ and 213 pounds. In his college career, he amassed 237 total tackles, 12 interceptions, five sacks, 22 pass breakups, and 34 passes defended at Alabama.

At this point, the only “for sure” thing that the Bills know is that if they can somehow land Left Tackle Matt Kalil, they will. Left Tackle is the #1 priority for the Bills with the loss of Demetrius Bell to the Eagles, but the chances that Kalil is still on the board at 10 is slim.

Barron would be a good pick-up for Buffalo because he can effectively play in space and play coverage. Overall, this draft could be full of surprises and this could be one of them. Could he be the missing piece to thrust the Bills into relevancy in the AFC East?

and keep checking back for the latest NFL news!