Now that seven weeks of the NFL season are in the books, we’ve reached the midway point of the fantasy football season. Hopefully your teams have been experiencing great success to this point. If not, there is still plenty of time for your players to turn their seasons, and your team’s season, around. Chances are that your team has been impacted, for better or worse, by one of the candidates for the midseason fantasy football awards.

Spiller erupted in the first two weeks, rushing for 292 yards and 3 scores to start the year on a great note. After suffering a shoulder injury against Cleveland, Spiller slowed down for a while, but he has now found a spot in the Bills offense where both Fred Jackson and he can thrive. It’s true that we saw this talent from Spiller at the end of last year when Jackson was hurt. But from a fantasy aspect, Spiller finished 31st last year, was drafted on average as the 37th running back, and now Spiller sits at #5 in the running back rankings.  The way the Bills’ offense has been working lately it seems like there will be plenty of room for Spiller to break off big runs and screens week in and week out, making him as consistent a running back option as you could find this year. 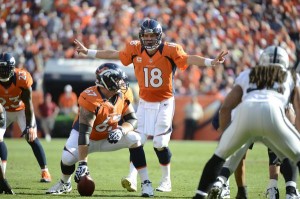 As if Peyton Manning had anything left to prove, he’s come back as excellent as ever following neck surgery. (Credit: John Leyba, The Denver Post)

This award is a landslide victory for Peyton Manning. Manning, once a quarterback with a reserved spot in the fantasy quarterback elite, was a player people shied away from this year following his neck injury that cost him the whole 2011 season. Well, Peyton showed us all how foolish we were for expecting anything less than classic Peyton quarterbacking. The elder Manning has thrown for at least 240 yards every game this year, eclipsing 300 yards four times, while accumulating 14 touchdowns to 4 interceptions. Not bad for a guy whose entire playing career was thought to be in doubt entering this year. There are many players who had lackluster seasons in 2011 and are picking up the pace again in 2012. But they are all runners-up by default because none of them can match what Manning has done this year.

Lance Briggs has led the way for the Bears’ defense with 37 tackles, 2 forced fumbles, and 2 pick-sixes. (Credit: Getty Images/Sam Greenwood)

The 49ers and Texans were the two most highly-touted defenses coming into this season, but it has been the Bears that have stepped up and showed the world how to put up points for fantasy football. Chicago’s defense and special teams has an insane 5 touchdowns in 6 games. What’s even more impressive is that none of those have come from the special teams units, as the new kickoff rule has all but eliminated Devin Hester’s legendary returning skills. Add in the fact that the Bears D/ST ranks 1st in interceptions, 2nd in fumble recoveries, 5th in sacks, and 1st in points allowed, and we have the best defense in fantasy football. 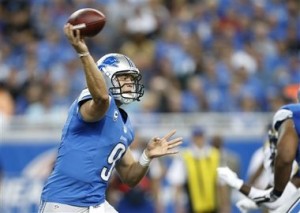 This was a very close pick between Stafford and Newton, but between the two, Newton was expected by some to be a bust as he entered his “sophomore slump”; Stafford was playing with the league’s best wide receiver in an offense that liked to pass more than anyone else. To see Stafford struggling this much is quite unexpected. Despite being fifth in the NFL in pass attempts, Stafford only has 5 touchdowns and 6 interceptions. Considering that Stafford was drafted by those expecting production similar to Aaron Rodgers (19 TD/4 INT), Drew Brees (18/7), and Tom Brady (12/3), owners of the Lions quarterback have to be extremely disappointed.

Alfred Morris, the winner of this year’s game of Who Wants to be Mike Shanahan’s Running Back! (Credit: Alex Trautwig/Getty Images North America)

There was a sneaking suspicion that the “Shanahanigans” would find their way into the Redskins’ backfield again this year. But no one expected the rookie from FAU to be the running back to emerge from the mess of a backfield that Mike Shanahan employs. Not only was Morris made the undisputed starter over Evan Royster, he has performed admirably to this point, and is one of fantasy football’s top 5 running backs. Morris has only posted single-digit points in one game this year. The fact that he’s getting at least 16 carries every game means that Morris is getting the opportunity to succeed week in and week out. Of course for all we know, Ryan Grant could be the Redskins’ starter by tomorrow, but for now Morris is the undisputed king of the waiver wire for 2012.

Matt Ryan, QB, Atlanta: While Ryan has been much more valuable in NFL football than fantasy football, he has solidified a place for himself among the upper echelon of quarterbacks with 1,706 passing yards and a 14-6 TD-to-INT ratio. Not bad for a player who was a 6th round draft pick on average.

Adrian Peterson, RB, Minnesota: What fools we were to expect that a silly little ACL injury could hold back the great Adrian Peterson! All joking aside, it’s great to see that Peterson is back to his elite self after the threat of starting the year on PUP nearly knocked him out of the top 10 running backs at draft time.

AJ Green, WR, Cincinnati: Julio Jones was surrounded by the hype of the high-flying Falcons offense, but it’s Green who to this point has emerged as the best sophomore wide receiver, and it’s not even close. Green is tied for the league lead with 7 touchdowns and is third with 636 receiving yards. 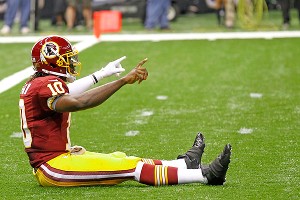 There’s no question that, based on draft position and success to this point in the year, RG3 is the most valuable player in fantasy football. Based on average draft position, Griffin was the 12th quarterback taken in most leagues, making him a fringe starter. Safe to say that Griffin has lived up to the hype, racking up 13 total touchdowns, including 6 rushing scores, while throwing only 3 interceptions. In every game that Griffin has started and finished, he’s posted at least 20 points. The only other quarterback that can match that feat is Drew Brees, who was a first-round pick in many leagues. To those that drafted Griffin expecting a repeat of Cam Newton’s rookie season, you might have found an even better player. Congratulations to RG3, you are fantasy football’s midseason MVP!