Top 10 Moments from Peyton Manning as a Colt

As I was going through all the great games that we’ve seen out of Manning it was hard to whittle it down to ten moments, so  we’ll call one an honorable mention, and without further ado..

Honorable Mention; Peyton’s first career win: With the days leading to the 1998 NFL draft, many draft experts and analysts predicted that Manning would be the second overall pick, with Ryan Leaf being the first. In the eyes of Colts’ faithful, they’re glad that they took Manning first overall. Manning’s first season was a forgettable one, with the Colts final record ending up being 3-13, but the young Manning was able to seal up his first career win over the aforementioned Ryan Leaf. In a rookie QB competition in the old RCA dome, Manning led the Colts to a 17-12 victory over the Ryan Leaf led Chargers. 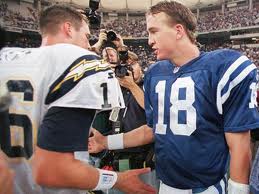 10. In his second season as a pro, Manning didn’t suffer the “sophomore slump” that many young NFL players encounter, in fact Peyton finished the season with 4,135 passing yards, marking the first of many times he surpassed 4,000 yards in a season. 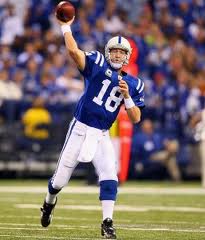 9. Manning and the Colts hosted the Broncos in the wildcard round of the 2003 NFL Playoffs. Prior to the game, Manning hadn’t won a playoff game in his career. A 41-10 beatdown of the Broncos gave Manning his first win, with an impressive five touchdowns and 355 yards, posting a perfect passer rating of 158.3 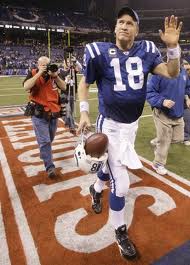 8. In the very next year, Manning and the Colts hosted the Broncos again, and again he lit them up. He posted a playoff career high 458 yards and four TD’s to send the Broncos packing once again. 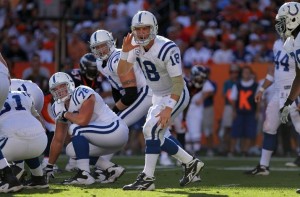 7. In a 2003 return to his home state of Louisiana, Manning sealed his one and only victory in New Orleans with a 6 Touchdown, 314 yard, 55-21 performance against the Saints. 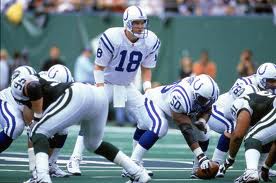 6. When I was 15 years old, I sat up late on a Monday night watching this game in awe. My Raiders just came off a disturbing Super-Bowl performance against the Bucs, so I sat back and enjoyed what Manning did to them. The Colts went into the 4th quarter down 35-14 against the defending Super Bowl Champion Buccaneers. With about six minutes left I almost shut the TV off, but decided to stay up and watch the Colts lose. Little did I know Manning would pull out a video game controller and lead the Colts to a Madden-like comeback rallying to beat the Bucs 38-35 in overtime.

5. The 2009 AFC Championship game against the Jets hosted at Lucas Oil Stadium was another classic Manning comeback game. Down 17-6 going into halftime the Colts didn’t roll over, and Manning led them to an impressive 30-17 come from behind victory to advance to their second Super Bowl in four years. 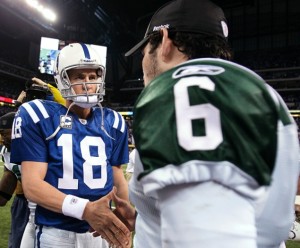 4. On December, 26th, 2004 Manning set the record for most touchdowns thrown in a season with 49. This record was later beaten by Tom Brady. Not to discredit Brady, but Manning did it in 15 games and sat out the 16th, while Brady needed the 16th game of the season to tie and eventually beat the record. But nonetheless, watching Manning set the new record was something special.

3. Manning to Marvin Harrison was a scary thought to defenders while the duo was playing together. On October 17th 2005, the pair set the all-time record for QB-to-WR scoring plays and receptions while the Colts wrote off the Rams 45-28. 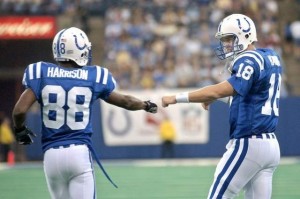 2. The 2006 AFC Championship game was one of many Patriots-Colts showdowns that left memories embodied into the football section of my brain, but this one was special. The Colts went into halftime down 21-3, only to come out swinging in the second half to beat the Patriots 38-34. Peyton stood on the sidelines as Tom Brady threw a game-sealing interception and the Colts went on to the Super Bowl. 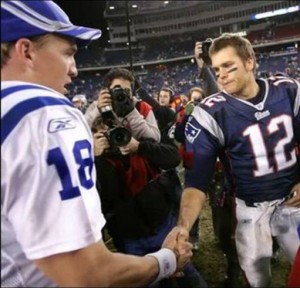 1. Go figure huh, Peyton’s lone championship. After beating the Patriots, the Colts headed to Miami to play in their first Super Bowl since 1971. Peyton threw for a pedestrian 247 yards and one touchdown in the 29-17 win over the Bears, but the weather was a big factor in the minuscule numbers. The MVP award was given to Manning for his play. For fans of the NFL, seeing him finally hoist that Lombardi trophy was long overdue. 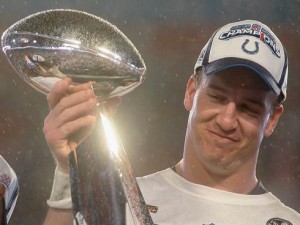