When you think of Tim Tebow, you think of a quarterback who can’t play that well, when I think of him, I think of a man who cares more about servicing his God rather than having his whole-life focus on the game of football. Many believe that was ultimately the reason why John Elway traded him from Denver to the New York Jets. Remember;  Elway was trying to trade him all the way back in February, before Peyton Manning even visited with Denver.

Everyone has seen it before a game, Tebow goes down on one knee and prays. That turned into a phenomenon named Tebowing. Funny thing is Tebow has been this way ever since High School, which is a true sign of his character and he has not changed with the success he had in college, and the crazy year he had last season. In the midst of all of this he stayed true to himself. In the beginning of almost every interview he says, “first, and foremost, I’d like to thank my Lord and Savior, Jesus Christ“, then he answered all questions. In fact, after last year’s play-off loss to the New England Patriots, he was upset and frustrated that they lost, but acknowledge that there are bigger things out there. He was happy because he made a dream come true for a “make a wish” foundation child that day. 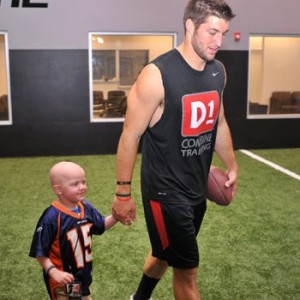 If you know of Tebow, this lifestyle is no surprise as he comes from a family surrounded by God. His parents are missionaries and that is all Tebow knows outside of football. He was born in the Philippians and that is part of the reason why he is behind the building of a hospital there.

To go with all the great things he does for the kids, he speaks to churches, much like he did yesterday as he spoke to a crowd of 15,000. He also visits prisons and speaks with inmates. In fact, he has made 10 prison visits dating back to when he was playing for Florida in College. Accompanied by chaplain and longtime family friend James Williams, Tebow had spoken with everyone from death row inmates to young offenders new to the system.

“It’s hard to fool people who are incarcerated,” Gerald Evans, an inmate at Lawtey Correctional Institution in northeast Florida, told the New York Daily News. “They can see right through you. They can tell when a guy’s faking, every time.

Tebow has visited Lawtey twice, talking faith and throwing a football with inmates in the prison’s gymnasium.

“Being in prison you automatically see the worst in people,” inmate Tyron Thomas said. “You meet a lot of people who pick up the Bible and when they put it down you can never tell they read it. There was just something about Tebow, and how he truly believes in the word of God. It’s kind of freaky, actually. It’s not something you see too often.”

Tebow will always have his critics just like everyone else in the spot-light. One man who has been known to be his biggest supporter is Skip Bayless. Bayless this morning on ESPN First take said this. “Athletes shouldn’t be role models, parents should be.” It made me shake my head, the reason why athletes can be role models is because kids look up to these players and they should.
Sometimes as a football fan because we are so passionate we forget the idea that it is just a game. However, when guys like Tim Tebow come around it tends to remind us of what is important in life. For whatever you believe in or passionate about, you have got to appreciate a man like Tim Tebow.