For two years, Andrew Luck has been unofficially the No.1 pick in the NFL draft. The only difference to this year compared to last year is that Luck is actually in the draft this time.  Andrew Luck has the tools to be a great NFL quarterback and everyone knows that. The only reason the idea is flying around that Robert Griffin III may go ahead of him is because of his athletic ability, but let’s put that to rest. Luck met with the Indianapolis Colts on Tuesday and after the meeting, Colts’ owner Jim Irsay tweeted this:

Met with A Luck#12 n Indy 2day for 3 hrs;it’s easy 2c why the #1 pick n this Stanford phenom has been synonymous with each other 4over 2 yrs

After reading this tweet, you get the impression that Andrew Luck will no doubt be the No.1 pick in this year’s draft and will be the face of the Indianapolis franchise. Not that this is a surprise, but the Colts have been flirting with the idea of drafting Robert Griffin III after the year he had, when he won the Hiesman Trophy. 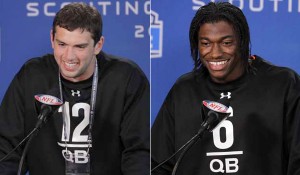 So as expected, the focus will now leap frog to the No.3 pick and who the Minnesota Vikings select.