should draft early. If they can field an injury-free defense they would be all set, as they are already packed with young talent. If linebackers Shawne Merriman, 26, and Paul Posluszny, 26, return to form and stay healthy, it would eliminate the need for a linebacker in the early rounds. The emergence of Ryan Fitzpatrick last season, coupled with coach Chan Gailey’s high opinion of him, makes it hard for me to believe the Bills would take Cam Newton of Auburn or Blaine Gabbert of Missouri at the 3 spot. It simply makes no sense to me. Newton is an athletic freak, this is true, but his talent is raw and unpolished, and may not translate over to the faster pace of the NFL. Sheer athleticism won’t win you games at QB in this league, and if his mechanics  don’t pan out, it would be a wasted pick.

I feel the Bills can address a more urgent need with the three pick, then look to pick  up another prospect at quarterback in the second round, such as a Jake Locker from Washington or Andy Dalton of TCU. It would give the Bills time to develop a solid QB behind Fitzpatrick, all the while not creating the team distraction I believe bringing in Cam Newton would.

Three guys the Bills should look at drafting are CB Patrick Peterson of LSU, WR AJ Green of Georgia, and OLB Von Miller of Texas A&M. Some would say the offensive line should be a priority, but the reason I don’t think the Bills offensive lines woes are as serious as people think is basically injuries. If the projected starters on the line are all healthy, the offensive line will be just fine, and with the talent in this draft it would be absurd to waste a three pick at this position. If the need is there for an offensive lineman, they can find a quality guy in the 3rd or 4th round. 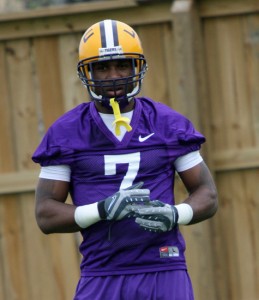 Award winning, best defender in the nation, get-on-the-field-and-make-plays type of prospect(view). It boils down to what the Bills deem as the most urgent need. I’ve already explained why taking a quarterback here wouldn’t be a smart move. Peterson could step in right away and at least play nickel-back, and possibly even replace the aging Terrence McGee at a starting spot. He would provide a play-making boost to a defense that, if healthy, could be very dangerous. Defensive linemen Terrel Troup and Alex Carrington showed a lot of promise last year as rookies. Imagine a Bills defense with a healthy Merriman and Posluzny at linebacker, Troup and Carrington upfront, then Peterson and ball-hawk Jairus Byrd in the secondary. Sounds like a good idea to me, and an immediately improved defense would take pressure of the offense to score 30 points a game to have to win. It all comes down to prioritizing, and if the Bills priority in the first round is defense, Patrick Peterson is their guy. AJ Green from Georgia is the wide receiver equivalent to Peterson at corner. The six foot three, 211 pound speedster is as close to a no-lose pick at this position as you can get(view). Reminds me of the Lions selecting Calvin Johnson a few years back even though their previous two picks at receiver had gone terribly wrong. That’s how good this guy is. He would give the Bills an elite group at receiver, teaming up with Lee Evans and Steve Johnson, and would also be able to spread the field for Fitzpatrick, who isn’t scared to go deep.  If the Bills feel they don’t have enough on offense, Green would be an instant playmaker and make the Bills offense extremely potent. They showed signs last year of being a high-powered offense, and Green would undoubtedly put them over the top. So once again it’s based on priority, but he’s another can’t miss prospect the Bills should consider.

Texas A&M linebacker Von Miller is the third guy I think the Bills should look at. My problem here is that if Shawne Merriman returns to his Pro-Bowl form and his healthy,

they don’t really need Miller. Taking the Butkus Award Winner at three would mean they miss out on guys like Peterson and Green who would immediately improve the team a great deal at their respective positions. I guess it comes down to the faith the Bills have that Merriman will be healthy and ready to go. I just can’t see the Bills choosing Miller with Peterson, Green, and even Newton on the board if it gets to the extreme that they feel they need a quarterback that early. 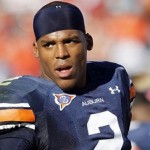 I think the Bills should decide for sure what they are committed to in the first round. If it is defense, then Peterson or Miller should be the pick. If it is best player available, I’d go with Peterson or Green. They should strongly consider a quarterback as well, but given the number of very talented prospects in the draft, it can wait until round two. I would go as far to say that most of the other prospects at QB are actually better quarterbacks than Newton in terms of accuracy and mechanics, and like I said before, Newton cannot win games with athleticism like he did at Auburn. This is the big leagues.

The Bills have five picks in the first four rounds. They have a chance to improve their defense or offense right away in round one, bring in a quarterback round two, and address other needs in rounds three and four. There will be quality players available every time they take the podium, and I am overly curious to see what direction the Bills go given the many options available to them. After a horrific start of 0-8 last season, the Bills closed out the season 4-4. They lost close, winnable games to Kansas City, Baltimore, Chicago, and Pittsburgh, who were all playoff contenders. A few key additions on draft day and remaining healthy could realistically make the Bills a legitimate playoff contender, and I look for that scenario to play out given the team they will have after the draft.