Hard to believe we’re only 3 days (one weekend) into the MLB playoff season, and to me, the picture is becoming clear. A photo-driven recap of the weekend:

On Friday night…
Two teams already eliminated, the Braves and Rangers are out. Surprising result given their talent and strong position over the last month. I’ll save the infield fly drama for our other blogs below. But a long, cold winter in Arlington and Atlanta. 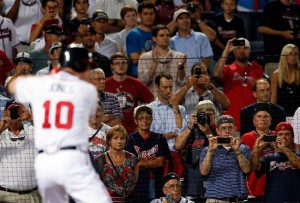 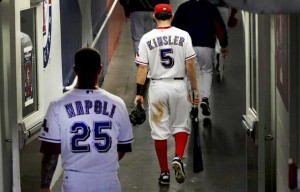 On Saturday night…
Detroit punched the higher seeded A’s in the nose with an outstanding performance by Justin Verlander and bullpen and timely hitting. Detroit would have been in world of hurt without this one, having their ace expended and needing 3 of 4, 3 on the road. But now, with one more game in Detroit, the A’s suddenly were on the defensive and desperately needed to capture Game 2… 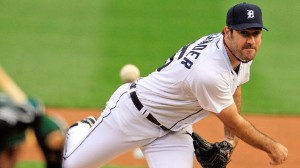 Cincinnati likewise showed all the capabilities that would come with being the second best team in baseball, even overcoming a starter who left the game with back spasms. With the game at 2 runs or more of a lead from the 3rd inning on, the Reds positioned themselves to only need 2 of 4 games, with 3 at home. 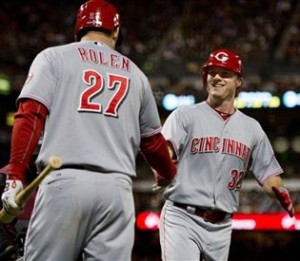 On Sunday…what a day of baseball. Four games, three of them were down to the last inning
In what seemed like 6 hours since the previous nights game ended, the Tigers survived a seesaw battle with Oakland, with strange plays like passed balls, bobbled cans of corn, and oddly poor relief pitching from both teams. When the dust settled, a bottom of 9th Sac Fly pushed across the winning run for the Motor City Kitties and put them one win away from moving on. 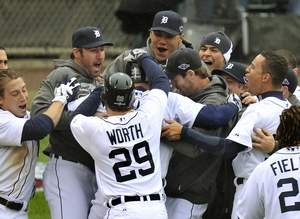 Then the Cards and Nationals opened their series, in a low scoring game befitting of two strong starters, the Nats outlasted the Cards by jumping on their bullpen in a 2-run 8th and limiting the Cards to only 3 hits. Seems like the experienced Cards were ripe to steal this game and put the young Nats on the defensive but Washington’s late inning heroics (including the escape of a bases loaded, no out jam in the bottom of the 7th) put them in the driver’s seat. 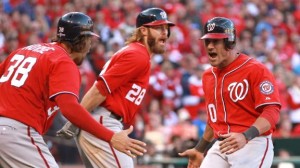 After some rain in Baltimore, the Yankees and Orioles battled in a classic duel befitting of their East Division title chase. Stuck on 2-2 since the early innings, both teams got chances to score and didn’t. Until the Yankees busted out in the 9th, torching the previously scarless Orioles closer Jim Johnson for 5 runs. If the Orioles could have sneaked this one against Sabathia, they would have had all the confidence in the world. Now, I’d say the Yankees are in strong control. 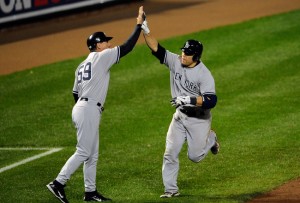 And in what turned out to be the only lopsided game of the day, the Reds steamrolled the Giants for the second night in a row. The punchless Giants only scratched out 2 hits, the Reds had more than enough offense to take a 2-0 series lead heading back to Cincinnati. 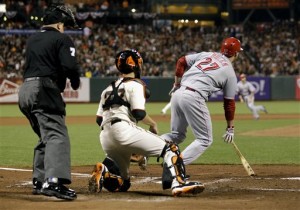 So from my vantage point, it looks like the Reds and Nationals are going to move on, Nationals with the most work to do, especially with the Cardinals recent postseason magic. And it’ll be Yankees vs. Tigers in an 2011 ALDS rematch. Tons of star talent on both sides, MLB’s TV partners are salivating over that one (let’s face it, Nate McLouth and Josh Reddick don’t have the TV appeal of Derek Jeter and Miguel Cabrera).

The chances that I’m wrong, probably 80%, MLB postseason proves that year after year!