The NFL is the only professional sport that has the most exciting off-season. Between trades, Free Agency and hold-outs, there is never a dull moment.

There is a rumor worth talking about that the New York Giants and the Cincinnati Bengals are talking about a trade that would send linebacker Keith Rivers to the Giants. Rivers is a solid linebacker and after the Giants losing numerous players after their Super Bowl win, this addition is needed; even though Rivers may be best known as the guy who received a broken jaw from Hines Ward. 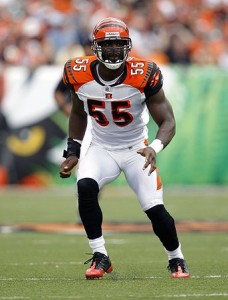 The rumor has come from a reliable source, Mike Garafolo of the Star-Ledger, who is one of the biggest reports in the game. When he checked the story out, no one told him that he was on the wrong track. He said there is some fire to this smoke. Rivers is currently in New York and the Bengals were reportedly looking to move him after re-signing Manny Lawson last week.

Even the Cincinnati papers are getting wind of the deal. Joe Reedy, a writer for the Cincinnati Enquirer, wrote Wednesday the “wheels are turning” on a possible deal, but let’s be honest the Giants cannot give up too much to obtain Rivers, ever since the Hines Ward injury Rivers has struggled staying healthy.