Caught up in all the draft hype today was a report from ESPN’s Adam Schefter, saying that the Oakland Raiders are likely to sign Free Agent QB Matt Leinart during the visit to Oakland he has planned this week.

If the Raiders do sign Leinart, he would be the second Heisman winning QB from USC on the roster, and would presumably be the immediate backup to Carson Palmer, rather than Terrelle Pryor, whom Oakland used it’s third round draft pick on in last seasons supplemental draft. 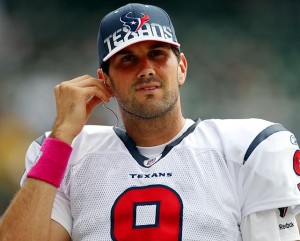 Matt Leinart may be headed to Oakland

The former 2-time National Champion winner was drafted tenth overall by the Arizona Cardinals in 2006, and has not lived up to his hype coming out as a Trojan, losing the starting job in Arizona to future Hall of Fame QB Kurt Warner. After being released by the Cardinals in 2009, Leinart went on to play for the Houston Texans. His time in Houston helped him tremendously.

As a Cardinal, he was a cocky, backwards-hat wearing, immature kid with no motivation to live up to his hype. As a Texan, he was a guy that took major steps in maturity, and had proved himself to Texans brass as the guy that could lead the franchise if called upon. He got his chance, and had many people thinking it was his chance to prove himself. In his first start in Houston, Leinart suffered a separated shoulder that caused him to miss the rest of the season. He was released in the offseason, after Texans Rookie QB TJ Yates showed that he could get the job done.

Leinart would be a nice fit in Oakland, for one, because his style and play is nearly the same as Carson Palmer’s due to being “groomed” by former USC offensive coordinator Norm Chow, and for two, the Raiders hired OC Gregg Knapp from Houston during the offseason to call the shots for the silver and black, so Leinart already knows the offense. It would be a nice pickup for the team, as no other clubs have shown interest in Leinart coming off the season ending shoulder surgery.

In 31 career games, Leinart has completed 57.6 percent of his passes with 15 touchdowns, 20 interceptions for a 71.6 passer rating. He has won eight of his 18 career starts.