Today the NFL handed down the punishment for the New Orleans Saints and the Bounty situation that the team ran under head coach Sean Payton and Defensive Coordinator Gregg Williams from 2009-2011 when Williams departed.

The following punishments have been handed down: Head Coach Sean Payton will be banned from the league for one season, effective April first. General Manager Mickey Loomis will be banned for 8 weeks effective at the opening of the season, and will have to pay  $500,000 in fines. Assistant Coach Joe Vitt has been banned 6 weeks, and he’ll have to pay $100,000 in fines. The Saints will also have to forfeit two 2ndround picks, one in the 2012 draft, and one in the 2013 draft. All of those involved in bans and fines, will also lose pay during their said bans. 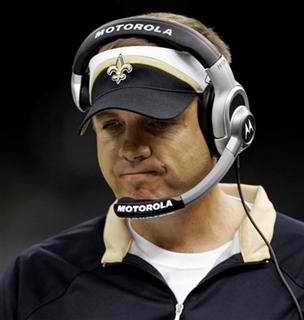 Saints HC Sean Payton suspended for all of 2012

As for Gregg Williams, he has been banned from the league indefinitely and will undergo an evaluation at the conclusion of the 2012 season to determine whether or not he will be allowed back in the league.

There are going to be more fines and suspensions handed down for players, but that will be handled at a later date.

This is bad news for the Saints as they lose the Head Coach, Assistant Coach and General Manager. It will also put a halt to the contract status of QB Drew Brees who plans on not signing the Franchise Tag that was placed on him, and has said that he will not report to the team when things get started for the season. With no GM, no Coaches and nobody in place to handle the contract, the future does not look good for the team. Saints owner Tom Benson has not been fined for any of this, but he’s in a tough situation moving forward.

Sean Payton was interviewed by Jay Glazer as soon as the announcement was made. He said he and his family had braced for a four-game ban, not expecting a whole season. He was asked if he was okay, and he replied “No, I’m not okay!”, clearly shaken up by the news. Payton was due $8 million for this year, now he will receive nothing.

Mickey Loomis’ ban will start at the beginning of the season, so business in the front office will remain until week one.

Commissioner Goodell has stressed player safety since he began running the league, and it’s no surprise that he laid down the law here.