When you think AFC North, you think defense. You think Steelers and Ravens. You think hard-hitting, smashmouth, in-your-face, down and dirty in the trenches football. You think Ed Reed and Troy Polamalu. You think Ray Lewis and James Harrison. Recently two others have thrown their hat into the conversation as elite defensive players in not only the division, but the NFL. They are Terrell Suggs of the Ravens and LaMarr Woodley of the Steelers.

Being that Suggs is going into his 9th year and Woodley his 5th, I had to think of a fair way to actually find out who the better player is. That said, I decided that analyzing their first four seasons in the league would be the best way, because it wouldn’t take into account Suggs’ age, but still be fair to both players. 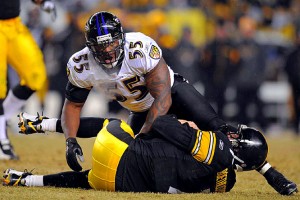 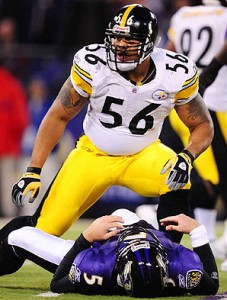 Based on the stats, Terrell Suggs had a better first four seasons in the league. They are nearly dead-locked on sacks and interceptions. Suggs has played four more games starting one more, which probably wouldn’t make a difference but with four more games I’d assume Woodley would take the sack lead. Right now, I would have to say Suggs gets the edge overall, but his recent production has steadily declined, whereas Woodley seems to have an infinite ceiling. My prediction is that after Woodley has played eight seasons, he will have more sacks and interceptions if he can avoid the decline we sometimes see as players get older. But that is only heresay at the moment. Only time will tell, as both men are warriors on highly respected and tough defenses, and both fit the bill to a T in pass-rushing and pass defense at their linebacker positions. I for one love it when these teams collide, and can’t wait for the lockout to end as the Steelers and Ravens are set to square off in Week 1.