Let’s just make this Tebow trade to the Jets even more interesting. The most famous backup quarterback in the NFL is apparently very interested in renting a cottage in the same Bedminister New Jersey gatehouse community as Mark Sanchez –  located just a hop, skip, and jump from where Jets QB currently nests. 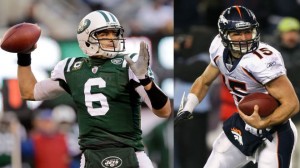 Per a report from the New York Post, a source said Tebow “really wants to live there.” Talk about adding extra pressure, Sanchez not only has to look over his shoulder for his starting job, but may now have to be neighbors with the very man that is threatening his already shaky job security.

The four bedroom house Tebow is eyeing apparently costs $10,000 a month. He also inquired about other Trump properties in Midtown, but none caught his attention quite like the Bedminister golf-course community. Who knows, given Tebow’s nature, it is not far fetched that the two could form quite the friendship if Tebow rents the house, but then again Sanchez can’t be too happy about what’s transpired the past couple days.