The 2012 MLB season is here and the boys of summer are back. With the new season comes new hopes, dreams, fascinations, and frustrations. There is a story behind every team and player. For every player, comes a new page in baseball history. Here is a list of the top ten players to watch and follow this season.

Note: This is not a list of the top ten players, but rather list of players with a story worth following.

10.  ALEX RODRIGUEZ (3B New York Yankees)  A-Rod has a lot of ball left in him, but the Yankees fans have far less patience. Going into the fifth year of a ten-year $275 million contract, there is a lot of pressure on A-Rod to produce big. Each of the previous three seasons, his slugging percentage lowered. After giving good production in the 2009 post-season, A-Rod’s playoff struggles returned the next two years. The 2012 season will be a long one for the Yankee third baseman. Even if he has a tremendous regular season, not much respect will be given if he doesn’t produce in the playoffs. Bottom line, this could be a make or break season for the slugger. A good season will extend the Yankee love. A bad one will wreck the relationship. Let’s see how A-Rod handles the pressure. 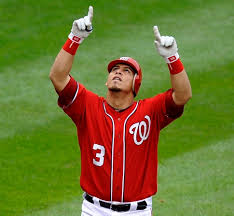 9.  WILSON RAMOS (C Washington Nationals) Ramos was literally kidnapped at gun point during the off-season in his home country of Venezuela. He was rescued two days later by authorities conducting a commando style air operation. Over recent years, kidnappings have been on the rise in Venezuela. Victor Zambrano, Yorvit Torrealba, and Ugueth Urbina have each had family members kidnapped for ransom money. Ramos was the first Major Leaguer to actually be kidnapped. In his rookie season (2011), Ramos batted .267, hit 15 HR, and knocked in 52 runs. He ranked third in throwing out potential base stealers at 28%. Finishing fourth in the Rookie of the Year Award voting, Wilson Ramos is definitely a star on the rise. We will have to see how he reacts to such a traumatic experience. One thing is for sure, life itself is bigger than sports.

8.  JASON HEYWARD (RF Atlanta Braves) Much has been made of the immense talents possessed by Jason Hayward and rightfully so. Heyward wasted no time showing his flair for the dramatic, hitting a home run in his Major League debut on opening day of 2010. Make no doubt about it, he is a serious five tool talent. His numbers dipped quite a bit in 2011, but a bad shoulder surely played a role. Still at the young age of 22, look for Heyward to have a breakout season in 2012.

6.  MATT MOORE (LHP Tampa Bay Rays) Matt Moore is a 22 year-old left-handed fireballer in the most talented rotation in baseball. After making his MLB debut in mid-September of ’11, Moore exploded onto the prime-time scene making his first post-season start in Game One of the ALDS. Pitching seven shut-out innings, while giving up only two hits, Moore left the heavy hitting Texas Rangers’ lineup scratching their heads. Folks, this was only a taste of what’s to come. Look for Moore to lead the Rookie of the Year race.

5.  STEPHEN STRASBURG (RHP Washington Nationals) The 6’4″ 220 lb first pick of the 2009 MLB draft is ready to get back at it. Returning from Tommy John surgery, Strasburg will be the talk of National League pitchers. As a rookie in 2010, he struck out 92 batters in 68 innings to go with a 2.91 ERA. It has already been announced that Strasburg will be the opening day starter for Washington, so get ready. 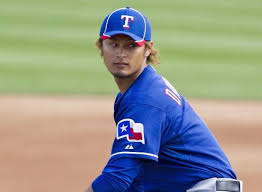 4. YU DARVISH (RHP Texas Rangers) The Texas Rangers shelled out plenty of cash to get the rights to sign Darvish. Known to be the best pitcher in Japanese professional baseball, Yu Darvish is now in the States, and the frenzy will follow. In five professional seasons, Darvish posted an ERA less than 2.00 each year with a career WHIP of 0.890. Darvish is worth watching for many reasons. First, watch to attempt to figure out exactly how many pitches this man can throw. The numbers have been rumored as high as seven or eight. That’s probably an exaggeration, but during spring training, Carlos Gonzalez said he saw six different pitches in two at bats. Second, check his success against Major League hitters as compared to Japanese professionals. Darvish’s success could easily affect the number of future Japanese pitchers to come into the League. Third, it will be worth watching the media frenzy guaranteed to follow. All of Japan will be watching Darvish and it will be through countless number of media outlets. Finally, just watch for the joy of a new face in the game.

3.  RYAN BRAUN (LF Milwaukee Brewers) Braun is the reigning N.L. MVP. He is also the reigning controversy king of the MLB. Shortly after the season, it was announced that Braun tested positive for performance enhancing drugs (PHDs). Facing a 50 game suspension, Braun appealed and was “exonerated” as it was found that the test samples were “mishandled.” Very few would know whether Braun actually used PHDs, and there has been no verification one way or the other. Braun benefited from hitting in front of feared slugger Prince Fielder who is now in a Detroit Tigers uniform. All eyes will be on Braun to see how he adjusts without Fielder’s protection. Furthermore, let’s be honest, all eyes will be on Braun to see how he reacts after the PHD scandal.

2.  JUSTIN VERLANDER (RHP Detroit Tigers)  Verlander is a no-hitter waiting to happen. In throwing his second career no-hitter last season against the Blue Jays, Verlander flirted with a perfect game until losing it (walk) in the eighth inning. Verlander has made it no secret that he would love to throw multiple additional no-no’s. Coming off of an absolutely dominating season where he captured both the Cy Young and A.L. MVP Awards, Justin’s goal is to become an even better pitcher. Is it possible? Will he maintain last year’s numbers? While duplicating the statistical domination of 2011 will be extremely tough, don’t be surprised if Verlander walks off the field after the ninth inning with a fat ZERO in the opponent’s hits column. 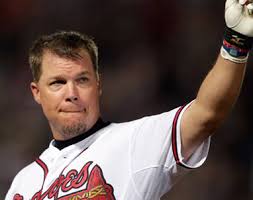 1.  CHIPPER JONES (3B/OF Atlanta Braves)  The last year in a fabulous career. Chipper Jones has announced his retirement after the 2012 season. Only Hank Aaron will go down as a greater Braves player. In his 17 full seasons with the Braves, the squad has made the playoffs 11 consecutive years along with an additional appearance. Jones has been the only constant in the lineup. If there is model of which a MLB player should be, Jones is the man to emulate. Enjoy this year. Players like Chipper Jones don’t come around too often. The people of baseball salute you, Mr. Jones. We will be watching.