Home / NFL / Torry Holt to Retire Where it All Started in St. Louis

When you’re an athlete, I believe that you die two times in life. The normal way as a human being and then when your career, because you know that you will never play again at such a high level.

Some say it’s the hardest thing to do. You must walk away from a game that you have played ever since you were a kid. Many have retired, then un-retired and some go into coaching immediately after their playing days. Almost to fill the void that is missing. 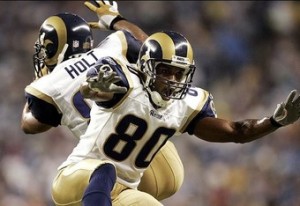 Torry Holt will sign a one-day contract with the St. Louis and retire as a Ram, the way it should be. Holt was a member of the “Greatest show on turf” and a Super Bowl champion in 1999. He made it to 7-pro bowls and finished his career with 13,382 yards receiving, with 920 receptions and 74 touchdowns. He was named to the NFL’s All-Decade team for the 2000s.

Torry Holt was a player whom many wide receivers copied their game after, he was a hard worker and never took a play off. Many teams have a set. No.1 and 2 receivers on their team. However, in St.Lious that wasn’t the case even though Holt was a rookie in 1999, he was as much of a threat as Isaac Bruce was.

As a football fan it has been an honor to watch this man play, the great game of football and the league will miss him. As we watch Holt leave this game it just makes us appreciate what we have seen from him.

No doubt in my mind he will be enshrined in the Pro Football Hall of Fame one day.