Things have gone well for the 49ers and second-year QB Colin Kaepernick. A little less than a week after pummeling the powerful Chicago Bears, Kaepernick led the team to a victory over the Saints Sunday while completing 64% of his passes, adding both a touchdown and interception.

But all isn’t forgotten with Alex Smith, the QB who in the last two years has won 20 of 26 games under head coach Jim Harbaugh after struggling early on in his career.

Smith was pulled from the starting lineup this week as the 49ers prepared for the Saints after he had yet to be cleared for contact stemming from a concussion he suffered two weeks ago against St Louis, and says he wants to be the starter.

“Obviously I want to start,” Smith said via the USA Today. “I think I should, but it’s not my decision, you know? I’m also a part of this team, and it was great to go out and get a win. That obviously comes first. It’s a tough situation, Kaep went out there and played good and got a win, and that’s the biggest thing for a quarterback.” 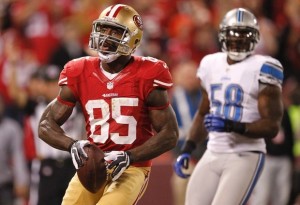 Kaerpernick did look impressive, and one member of the team, Vernon Davis sounded like he was fully supportive of a QB change two weeks ago after claiming that Colin had “taken the handcuffs” off of him coming off of a season high six receptions for 83 yards and a score against Chicago.

But Sunday’s win over the Saints, where Davis had zero receptions, wasn’t singing quite the same tune when asked about the QB change.

“When I look at Colin I see a great playmaker,” Davis said. “I think Alex [Smith] is still the man. In my heart I strongly believe that. You’ll know next week. I’m sure (coach Jim) Harbaugh will make a nice decision, who he wants to go with. I’m sure Alex is still our guy.”

Harbaugh didn’t say which QB he’d be starting next week at St Louis, although he had the opportunity. He didn’t commit to Kaepernick, but didn’t say he wasn’t starting either. So this week, we’ll wait again to find out who it is, likely up to kickoff once again.

Smith has been cleared and is ready to roll, but as Harbaugh says, he “tends to go with the hot hand”.