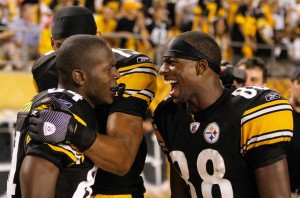 The Pittsburgh Steelers draft scouts have to feel like geniuses, literally, after last year’s picks at wide receiver. Antonio Brown, out of Central Michigan, and Emmanuel Sanders out of SMU, both enter their sophomore seasons with high expectations. Joined with breakout star Mike Wallace and sure-handed fan-favorite Hines Ward, the Steelers receiving corps looks to show why their nickname has become “Young Money”; then throw in underrated tight end Heath Miller for good measure. Consider these stats, then you’ll see why opposing secondaries will soon be petrified knowing gunslinger Ben Roethlisberger will have these guys on the field to launch the ball to:

Hines Ward: One of the Steeler Nation’s most beloved players, Ward has been a staple of 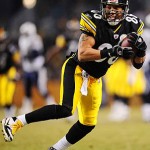 the Steelers for fourteen years. He put up the third lowest reception total of his career in 2010, but that was partly in due to the emergence of the other weapons in the Steelers offense. Ward is an excellent leader, as tough as they come, and will be unmatched as a mentor to the younger receivers. 2010 stats: 59 receptions, 755 yards, and 5 touchdowns.

Mike Wallace: After his promising rookie season, the burner from Ole Miss more than 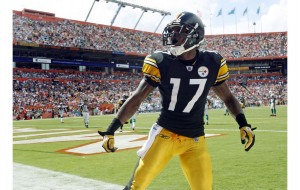 exceeded expectations in 2010. For the second year in a row he led the NFL in yards per catch(21.0), showing that he is dynamite with the ball in his hands. Considered one of the fastest, if not the fastest receiver in the league, Wallace ran a 4.28 at the combine. Get him on a straightaway and there is no corner or safety that can hope to keep up with him(view). Wallace can only improve on his breakout season, and has become the favorite target of quarterback Ben Roethlisberger. 2010 stats: 60 receptions, 1,257 yards, and 10 touchdowns.

Emmanuel Sanders and Antonio Brown: At the beginning of last season, these two were battling one another for a spot on the game day roster every week. While their individual stats aren’t all that impressive, they showed poise and promise every time the ball came their way. Sanders emerged mid-season as a reliable target for Big Ben, amassing 28 receptions for 376 yards and two touchdowns. Antonio Brown, who took a kickoff to the house the first time he ever touched the ball in the NFL, was a clutch performer during the Steelers’ playoff run. He made a circus catch on a 58 yard strike from 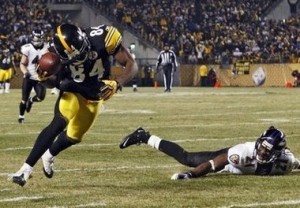 Roethlisberger on a 3rd and 18 against Baltimore in the AFC Divisionals, which set up the winning score(view). He also made a falling catch for a first down on a 3rd and 6 against the Jets, which sealed the AFC Title win in the fourth quarter. Following in the likeness of Wallace, Sanders’ 40 time was a solid 4.4, while Brown clocked in at 4.43. Both appear to have the poise of possession receivers, but also have the speed to be deep threats. 2010 combined stats: 44 receptions(Sanders 28 Brown 16), 552 yards, and 2 touchdowns.

Overview: The Steelers’ offense looks ready for a big season, should there be one, in 2011. Ben Roethlisberger is coming off two years of statistical bests, and threw 17 touchdowns

last season even while missing six games. Mike Wallace has the ability to become almost the best receiver in the league with his mix of size, speed, and fearlessness. Hines Ward will be solid and consistent as always. If Sanders and Brown are able to build upon the promise we saw in 2010, look for some bigtime plays and bigtime scoring from the Pittsburgh Steelers. All of this has failed to mention the fact that Heath Miller is an underrated, Pro-Bowl caliber tight end, and Rashard Mendenhall has been a 1,000 yard back two seasons in a row. I will not be surprised if Pittsburgh makes another deep run into the playoffs, but I will sure be disappointed if they don’t.