Boston Bruins: The rematch between Boston and Vancouver was a bloodbath, leading to 99 minutes of penalties between the two 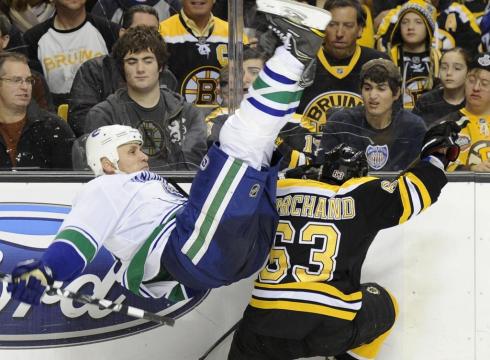 Buffalo Sabres: Whatever it is, nothing seems to be going right in Buffalo. To turn it around, Ryan Miller needs to step up his game. He has been soft for the past month, giving up soft goals and not giving his team a chance to win on a nightly basis. Miller is an all-star, but this year he is significantly underwhelming.

Carolina Hurricanes: With the Islanders defeating the Red Wings 5-1 last night, the Hurricanes, who have lost two in a row, officially moved into last place in the Eastern Conference. “Uh oh, we might have some competition for the first overall draft pick…” said everyone in a Columbus Blue Jackets jersey.

Florida Panthers: Since returning from injury, Marcel Goc has been on fire. He assisted on the game-tying goal by Dmitry Kulikov, and scored the game winning goal in 2-1 defeat of Vancouver on Monday night.

Montreal Canadiens: Montreal welcomed back goaltender Jaroslav Halak with open arms last night, as it was his first time returning since his magical playoff run with the team 2 years ago. Halak greeted Montreal with a 3-0 win, and his St. Louis Blues continued to roll under new coach Ken Hitchcock. I guess Montreal made the wrong choice between Halak and Price, huh?

New Jersey Devils: No matter what people might tell you about Ilya Kovalchuk, there is no denying that this guy is on fire right now. He has 4 goals and 2 assists in his last 3 games, although the Devils took a pounding in Calgary last night and lost 6-3.

New York Rangers: The Rangers continue to dominate the Eastern Conference standings. They are 9-1-0 in their last 10 games and have now won 5 games in a row. 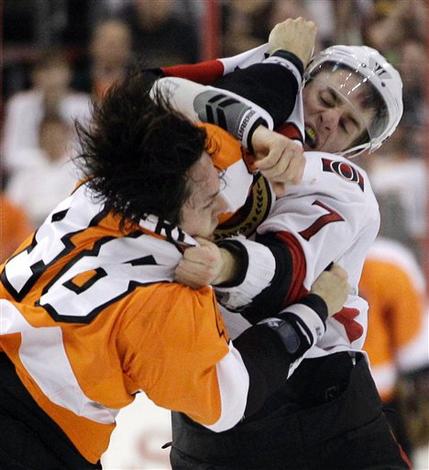 Ottawa Senators: Newly acquired Kyle Turris got wrecked in a fight with Philadelphia’s Danny Briere in Sunday’s 6-4 win over the Flyers. You gotta give Turris credit for trying to stand up to a guy like Briere, though.

Philadelphia Flyers: The fan who threw a banana onto the ice while African-American player Wayne Simmonds was on the ice was fined $200 dollars for his actions Monday afternoon. The judge determined that the actions taken by the fan were not meant to be racist.

Pittsburgh Penguins: The Penguins lost two more key players to injury this weekend, James Neal and Jordan Staal, and both are expected to miss significant time. With Sydney Crosby and Kris Letang already sidelined with injuries of their own, the Penguins have lost 5 in a row and taking a significant nose-dive in the Eastern Conference standings.

Tampa Bay Lightening: At this point in the season, I think it’s pretty safe to say that Steven Stamkos is carrying this team. He has 29 goals on the year…already. Seriously where would they be without him?

Toronto Maple Leafs: After blowing a 3-0 lead to Detroit Saturday night, the Maple Leafs pulled themselves together and scraped out a 4-3 win against the Red Wings. You really are making it harder on yourself, aren’t you Toronto?

Washington Capitals: The Capitals tour of the Western Conference has not been pretty. After losing to the Sharks in San Jose, they traveled to Los Angeles where they were defeated by the Kings 5-2. At least Ovechkin has learned to score again.

Winnipeg Jets: At the official mid-season mark, the new and improved Winnipeg Jets are now only one point out of a playoff spot. Do you think they’ll make it? I certainly don’t. But if Pittsburgh keeps falling the way they have, it seems more and more likely that Winnipeg will inhabit the 8th and final playoff seed.

in a 7-4 win over the visiting Columbus Blue Jackets. Although, since it was against the Blue Jackets, does it really count?

Calgary Flames– Jarome Iginla scored his 500th career goal during a 3-1 win for the Flames over the Minnesota Wild on January 7th, 2012. Iginla is the 42nd player in NHL history to score 500 goals…

Chicago Blackhawks– Have you ever wanted to grow a moustache just like Blackhawks head coach Joel Quenneville? Well, you’re in luck: Blackhawks.com has made a full .pdf document available for instructions on how to grow your very own “Q-stache.” Check it out: http://blackhawks.nhl.com/club/blogpost.htm?id=5499

Columbus Blue Jackets– Blue Jackets captain Rick Nash has come forward, saying that the no-trade clause in his contract isn’t concrete, and he could be traded if the circumstances are right. Check it out: http://www.nhl.com/ice/news.htm?id=610085

Dallas Stars– Dallas forward Jamie Benn was named the NHL’s First Star of the Week, after he registered seven points (4-3-7) in three games this past week, including two goals during a 4-1 win over the visiting Edmonton Oilers on January 7th. Benn leads the Stars in scoring, and is currently 15th in the NHL with 41 points….

Detroit Red Wings– Detroit forward Pavel Dastyuk does not care if he’s standing at an impossible angle. He will still score. Check it out:

Edmonton Oilers– Went 1-6-0 during their seven game road trip, which finished up last Saturday in Dallas with a 4-1 loss. In that seven game span, the Oilers gave up at least four goals in six of the games, while allowing three in the other. Yikes.

Minnesota Wild– Things keep going from bad to worse in Minnesota, who have won only one of their last ten games, and are now seven points out of first place in their own division, a mere three weeks after they held the top spot in the NHL standings…

Nashville Predators-Nashville goaltender Pekka Rinne is offering fans a chance to design his next mask. A helmet with the winning design will be worn by Rinne during a game, and the game-used mask will be gifted to the winning designer. Pretty cool.

Phoenix Coyotes– At long last, Phoenix Coyotes captain Shane Doan, in his 16th NHL season, after 1,100+ games…scored his first NHL hat trick in a 5-1 win over the visiting New York Islanders. And with not a moment to spare, either. Check it out:

St. Louis Blues– Don’t look now, but the Blues currently hold first place in the Central Division, ahead of both the Detroit Red Wings and the Chicago Blackhawks. Not bad for a team that fired its coach two months ago.

Vancouver Canucks-Vancouver beat the Boston Bruins 4-3 on Saturday, Jan. 7th in a rematch of last year’s Stanley Cup Final. Highly doubtful that winning that one game makes up for the sting of losing the Stanley Cup Championship…but hey. You never know.