Home / NHL / Around the Rink: Race for 8th in the East is Getting Interesting…

Boston Bruins: The Bruins seemed to have found their feet and it’s about time. The team had been sliding since New Years and with a 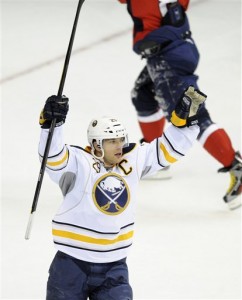 recent three game winning streak, they seem to have taken back some ground on solidifying the second seed in the playoffs.

Buffalo Sabres: Words cannot describe the importance of the Buffalo Sabres win over the Capitals last night in Washington. Two playoff teams on the cuff of making the playoffs and with the win, the Sabres have leapfrogged the Caps into the 8th and final playoff spot in the East. What a turnaround.

Carolina Hurricanes: The Hurricanes to continue to play well as they conclude the final few games of the season. They are 6-4-0 in their last 10 games and although they will likely miss the playoffs, the team seems to have bought into head coach Kirk Muller’s system, which should set up nicely for the team next season.

Florida Panthers: After two overtime losses to the Oilers and the Islanders, the Panthers picked up their play last night and defeated the lowly Montreal Canadiens 2-1. The good news is the Panthers continue to pick up points, and are a likely pick to win the Southeast Division.

New Jersey Devils: A huge win for the Martin Brodeur and the Devils last night as they defeated the Chicago Blackhawks in a shootout. The Devils are in a slump right now, which is not exactly a bad thing when your team is all but a lock for the sixth seed in the East, which would likely lead to a Panthers/Devils first round playoff match up.

New York Islanders: The Islanders season is all but over, as they have not technically been eliminated yet, but the team continues to play well. They played an extremely impressive game over the Pittsburgh Penguins last night in a 5-3 win. Just a pesky team that every year can’t seem to make the jump into the playoff picture.

New York Rangers: Although only slightly, the Rangers seemed to have held off their Penguins rivals to maintain their spot a top the Eastern Conference. What would really be interesting is how the Rangers fare against a dangerous Buffalo Sabres team in the first round of the playoffs.

Ottawa Senators: The Senators are only two points ahead of the 8th seeded Buffalo Sabres and are four points behind the New Jersey Devils in the 6th seed. If they continue to play the way they have been playing for the past month or so, Ottawa should be a lock for the 7th seed in the East.

Philadelphia Flyers: Tough, tough loss for the Flyers Monday night as they gave up 5 goals on 15 shots on net to the Tampa Bay Lightening in a 5-3 defeat. Although they have clinched a spot in the playoffs, it looks likely that they are stuck in the 5th seed and will not pass the Pittsburgh Penguins.

Pittsburgh Penguins: The Penguins were a scary team without Crosby, but with him they are almost unstoppable. The Penguins are 7-2-1 in their last 10 games and are slowly closing on the top spot in the Eastern Conference. The Penguins play the Bruins and Rangers again before the end of the regular season, which should make for some exciting games.

Tampa Bay Lightning: An extremely impressive win against the Flyers Monday night for a team that just seems to never go away. If only they had a goalie that could back up the offensive power that this team possesses then they could become a real threat.

Toronto Maple Leafs: As of last night the Leafs were officially eliminated from the playoffs, for the 7th season in a row. It has been a disaster in Toronto. 3-5-2 in their last 10 games under new head coach Randy Carlyle, who seems to have taken on more than he can handle.

Washington Capitals: A devastating loss for Alex Ovechkin and the Caps last night. Not only were they defeated by the Sabres, they were shut out…at home…and were pushed out of the 8th and final playoff spot.

Winnipeg Jets: It’s a stretch but the Jets could still make a push for the last playoff berth. It doesn’t help that they are 4-6-0 in their last ten games, and have now lost two and a row.

Calgary Flames– Their power play, ahem, ignited Monday night against the Stars, as they converted three of six chances with the extra man to defeat Dallas 5-4 and gain some much needed ground in the Western Conference playoff picture. The Flames’ hopes aren’t extinguished yet, but they could slip into the playoffs if they heat up (don’t worry, that’s the last pun) in their last five games. They’re currently two points out of eighth as they sit in 11th place in the West…

Chicago Blackhawks– How’s this for an interesting statistic: Chicago forward Marian Hossa is the Western Conference’s leading scorer with 74 points, but he’s only 10th in the league overall.

Columbus Blue Jackets– Columbus is apparently getting desperate for goaltending; they recently signed former Michigan goalie Shawn Hunwick to an amateur tryout deal. If Hunwick does in fact debut for the Blue Jackets this season, he’ll be the shortest goaltender currently in the NHL (and possibly the shortest of all-time): Hunwick is only 5’7”.

Dallas Stars– Defenseman Adam Pardy registered his third assist of the season during Dallas’ 5-4 loss to the Flames on Monday. That pulled him even with goaltender Kari Lehtonen in terms of points this season. Defenseman Mark Fistric (no goals, one assist) is now the only player on the Stars who has played most of the season and is still being outscored by the team’s goaltender…

Detroit Red Wings– Forward Valtteri Filppula is having the best season of his career. Now that he’s playing on one of the team’s top two lines, his offensive production has skyrocketed. After never netting more than 40 points in a season, he’s racked up 64 points in 2011-12 with six games to go….

Edmonton Oilers– LW Taylor Hall, the first overall pick in 2010, will have his season cut short due to injury, as he elected to undergo surgery to fix an injured shoulder that he claims has bothered him since his days in junior hockey….

Los Angeles Kings– Interesting fact: every skater who’s played for the Kings this year as at least one point.

Minnesota Wild– No player on the Wild has topped 50 total points this year; the closest player is Dany Heatley, who has 48 points so far. Every other team in the NHL has at least one player who’s broken the 50-point plateau, and this kind of offensive ineptitude is what will keep the Wild out of the playoffs for the fifth time in the past five years….

Nashville Predators– Alexander Radulov’s return to the NHL has been a success, for the most part. In four games, Radulov has notched one goal and two assists with an even plus/minus rating…

Phoenix Coyotes– They have only 37 wins this year, but what’s kept Phoenix in the playoff hunt is their ability to pick up a point in as many games as possible. They have 13 overtime losses, second most in the Western Conference, and those are 13 points that have allowed the Coyotes to stay in the top eight of the conference….

San Jose Sharks– They currently find themselves at the top of the wild Pacific Division, but that lead may not hold for long, as they’re only a single point ahead of Dallas and Phoenix, and are only two points ahead of Los Angeles….

St. Louis Blues– Goaltender Brian Elliot registered his third straight and league-leading ninth shutout of the season yesterday while backstopping the Blues to  a 3-0 win over the Nashville Predators. It was the Blues’ 15th shutout of the season as a team, tying an NHL record. Elliot also broke the Blues’ franchise single-season record for shutouts, topping Glenn Hall’s previous mark of eight in a season…

Vancouver Canucks– The Sedin Twins are both on pace for their lowest individual point totals in four years. Strange how they do everything together…