Boston Bruins: Are the Bruins finally coming back down to earth? They have lost 2 out of their last 3 games, and both to lowly teams. The first was a poor effort in Carolina against a decimated Hurricanes roster. The second was another poor effort last night in Tampa Bay. The Bruins will look to rebound tomorrow against the Devils.

Buffalo Sabres: Ouch, the Sabres are in an absolute tail spin. Owner Terry Pegula can’t be happy with his teams performance, as they are 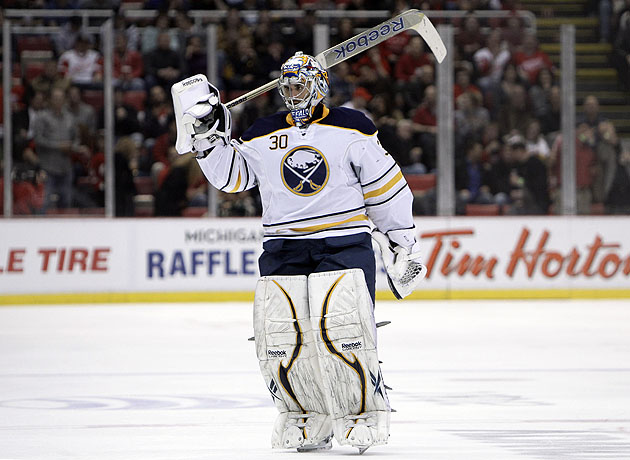 only 3 points above the Conference worst, and are 2-6-2 in their last 1o games. The teams most recent loss was a 5-0 win that came at the hands of the Detroit Red Wings. Ryan Miller had this to say about what needs to be done to help this team get back to form:

Carolina Hurricanes: What’s wrong with the Carolina Hurricanes? Lots of things. But the one thing they aren’t doing is losing enough. They are 9 points ahead of the Columbus Blue Jackets for worst team in the league. That means it looks like they won’t be getting the first draft pick. They are tied for last with the Islanders and Tampa Bay for last in the East, though.

Florida Panthers: The Panthers seemed to have cooled off a little bit, as they are 3-4-3 in their last 10 games. However, since the rest of the Southeast Division is doing so poorly, it seems that the Panthers are safe from any team sneaking up on them and taking the 3rd seed in the East, for now.

Montreal Canadiens: Montreal made a big splash this week, trading away forward Mike Cammalleri and prospects and draft picks to the Calgary Flames for forward Rene Bourque and prospects and draft picks. Cammalleri was pulled from the game against the Bruins, told to pack his bags and to hop on a flight to Calgary asap. I’m not sure this is the kind of trade this was, but I’ve never seen anything like that done before. I guess that’s what you get when you speak badly about the team you are playing for.

New Jersey Devils: The Devils are on a role and Ilya Kovalchuk is leading the way. He has 7 goals in his last 8 games, including 2 goals in a 5-1 smashing of the Winnipeg Jets last night in Newark. The Devils will need their million dollar man to continue this streak, as he looks to lead the team into this weekend as they will face some of the leagues top teams.

New York Rangers: Rangers head coach John Tortorella was fired up last night after a 3-0 win over the Nashville Predators. Apparently the Rangers owner, James Dolan, made a rare appearance with the media after the game and said his team looked “pretty close” to winning a Stanley Cup. To which Tortorella said this:

“I have my owner up here talking about the Stanley Cup. I think that’s a bunch of bullshit. We need to take one game at a time.”

Sounds like Dolan said something that he probably shouldn’t have said. Either way, one of the last people on this planet that I want angry at me is John Tortorella. Here’s why:

Ottawa Senators: Quick, nobody look. The Ottawa Senators are on a roll. They are 8-1-1 in their last 10 games and show no signs of slowing down entering the count down to the All-Star weekend, which they happen to be hosting. Coincidence? I think not. Oh yeah, and they beat up on the Maple Leafs last night 3-2.

Philadelphia Flyers: This week saw the rumor mill fly off it’s wagon as rumors spread like wildfire that Flyers forward James van Riemsdyk would be traded to the Toronto Maple Leafs for defenseman Luke Schenn. It seemed like a done deal, but it was soon shot down by Leafs GM Brian Burke and the rumor fell dead. Too bad, the Flyers could use another defenseman since Pronger’s concussion doesn’t seem to be getting any better.

In other news, why the hell haven’t I seen this earlier?

“Why you heff to be mad? It’s only game.” Hahaha WHAT?

Pittsburgh Penguins: Pittsburgh Tribune columnist Dejan Kovacevic questions how the NHL All-Star Game can’t feature Penguins forward James Neal. In this case, we tend to agree. Neal is having a terrific season with 24 goals, tied for second in the league. But plenty of players were snubbed from this years All-Star Game, and James Neal is only one of them.

Tampa Bay Lightening: Perhaps the Lightening finally have some life, as they defeated the high-flying Boston Bruins last night 5-3 in Tampa Bay. In other news, the Lightening still are quite a hole, as they find themselves tied for last night in the conference with 40 points.

Toronto Maple Leafs: The Maple Leafs are so close to a playoff spot they can almost taste it. They are 1 point behind the Capitals for the 8th and final playoff seed. However, the Leafs are 4-5-1 in their last 10 and are currently on a 3 game losing streak. If only they had van Riemsdyk…

Washington Capitals: The Capitals are starting to improve their game, and it’s good timing too. They are 7-3-0 in their last 10, and it looks like Alex Ovechkin has learned to score once again. However, as soon as things start to look up, the Capitals come up with a goose egg against the Islanders. Can’t ever win if you’re a Capitals fan.

Winnipeg Jets: After defeating a powerful Ottawa Senators team the night before 2-0, the Jets entered yesterday’s game in New Jersey hanging their heads high. However, penalties and other troubles (including Ilya Kovalchuk) led to the Jets downfall, as they fell to the Devils 5-1. Chris Mason was chased after a period and a half of play, the night after shutting out an impressive Ottawa offense.

Anaheim Ducks-The Ducks are 5-0-1 in their last six games. Where was this kind of winning earlier in the season? You know, before Anaheim had dug their own grave by winning only 11 of their first 40 games?

Calgary Flames– Reacquired LW Michael Cammalleri in a trade with Montreal. Cammalleri played four years in Calgary before joining the Canadiens in 2009….

Chicago Blackhawks– LW Viktor Stalberg was named the NHL’s Second Star of the Week after posting five goals in three games last week, including a hat trick against division rival St. Louis in a 5-2 win….

Colorado Avalanche– They’re 1-3-1 in their past five games, a span in which they’ve only scored six goals. Where’s the offense?… In other news, rookie LW Gabriel Landeskog leads the Avs in both shots (136) and +/- (11), and is third on the team in goals with nine. The young Swede certainly has a bright future ahead of him…

Columbus Blue Jackets– Rookie forward Ryan Johansen is second on the team with a +4 rating, and is one of only three Blue Jackets with a positive +/- rating. Yikes.

Dallas Stars– Déjà vu all over again? Dallas could be in for another rough winter after losing their top two centers, Jamie Benn and Mike Ribeiro, to injury.  They’re 1-3-1 in their last five games, and this looks eerily similar to last year, when they lost top forwards Brad Richards and Jamie Benn to injury and dropped out of the playoff race with a 1-9-2 February….

Detroit Red Wings– the ghost of Peter Forsberg apparently lives in Detroit (and for those of you wondering, no, he’s not actually dead, just retired). A scant few days after Forsberg’s fellow Swede, Henrik Zetterberg, pulled Forsberg’s famous shootout move in a win against the Coyotes on Jan. 12th, Zetterberg’s teammate Jiri Hudler pulled the same move to beat the Dallas Stars in a shootout on January 17th. Check it out:

Edmonton Oilers– Are they looking for a three-peat? The Oilers are now only seven points out of last place in the NHL standings, and could get the #1 overall draft pick for the third year in a row. The Oilers could really use a defenseman to go along with all those forwards they’ve been drafting (hint hint)….

Los Angeles Kings– They’re struggling to score goals, but aren’t struggling to win. The Kings have the second lowest goal-total in the NHL (105), but also have the fifth-lowest goals-allowed total in the league, thanks to the elite goaltending of Jonathan Quick. Despite that low offensive output, the Kings are holding fast for a playoff position, as they currently stand at 7th place in the Western Conference.

Minnesota Wild– Things are going from bad to worse in the State of Hockey. Wild captain Mikko Koivu, the team’s leading scorer with 33 points in 41 games, will be out of action for at least two weeks after he was hit by St. Louis’ Vladimir Sobotka and suffered an injury to his shoulder.

Nashville Predators– Before the 2009 Entry Draft, Ryan Ellis was deemed by many as “too small” to play  as a defenseman in the NHL at 5’10”, 179 pounds. Yeah, let’s ask Wayne Simmonds about that:

St. Louis Blues– The Big Blue Machine keeps on truckin’, as St. Louis is now third in the NHL standings with 60 points. Why does Ken Hitchcock keep getting fired?

Vancouver Canucks– We’ll finish with some words of wisdom from KISS’ Gene Simmons, via canucks.com, who had this to say about hockey after watching the Ducks vs. Canucks game on January 15th: “I never was a hockey fan because I couldn’t fathom how you could stand on ice, much less go 30 MPH on razor blades. I don’t get it. And they go backwards! You’re kidding me. And also, they’re gentlemen. If anybody swung at me, we’d take it outside.”