Home / NHL / Around the Rink: Those Pesky Devils Won’t Go Away

Boston Bruins: It’s a good thing the Boston Bruins remember how to beat the Capitals, as they did so a few days ago 4-1. The once unstoppable team is 5-4-1 in their last ten games, and look to be slipping from their once unreachable position.

Buffalo Sabres: Coach Lindy Ruff was injured during a Sabres practice by his own teammates. Can anything go right for this team? 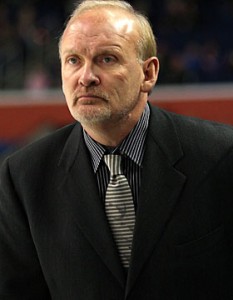 Carolina Hurricanes: The Hurricanes have slipped to last place in the East with 49 points. They have been doing well as of late, however, with a 6-2-2 record in their last 1o games. It probably won’t be enough, though, and this team will continue to fall to acquire a high draft pick.

Florida Panthers: The Panthers were embarrassed on the road last night against the Capitals. With the loss, the Panthers fall from third place to 9th place in the east. It’s becoming ever so clear that only one of these teams will make the playoffs, and be ousted in the first round. Damn the southeast is weak.

Montreal Canadiens: Trade PK Subban? Yeah right Montreal. If you’re going to trade away one of your young stars you better expect to get some serious return for him. He’s probably one of the best players on this crappy team right now.

New Jersey Devils: Ilya Kovalchuk is this the NHL’s second star of the week, and he is leading the Devils who are on a 5 game winning streak after the win against the Rangers last night. They have defeated almost all of the top teams in the East during their streak. Looks like they’ll make
the playoffs after all.

New York Islanders: Wow, talk about a monster goalie. Islanders got one hell of a game from Evgeni Nabakov last night as he shutout, literally and figuratively, the Philadelphia Flyers last night on the road. Nabakov stopped all shots in regulation, overtime, and the shootout to get the win. Who needs Rick DiPietro anyway?

New York Rangers: The Rangers were furious last night after a goal by Artem Anisimov was called off due to goaltender interference. The goal was scored with 3.5 seconds remaining with a 1-0 Devils lead. Oh well.

Ottawa Senators: To the surprise of no one, the Ottawa Senators are melting faster than the snow in Spring. Didn’t everyone see this happening like months ago? Props to them for even lasting this long before completely collapsing.

Philadelphia Flyers: The Flyers weren’t upset that they didn’t score a goal on the New York Islanders last night, saying things like

‘We played a good game, but their goalie was just too good’. Wow, when’s the last time we’ve heard that?

Pittsburgh Penguins: Are the Penguins getting healthy yet? No, not really. Are they still amazing even though they lost to the Devils 5-2? Yes, absolutely. They are 7-2-1 in their last 10 games.

Tampa Bay Lightening: The Lightening are 8-16-3 away from home and have a -28 goal differential. And you have players like Steven Stamkos and Martin St. Louis on your team. Ouch.

Toronto Maple Leafs: Don’t look now, but it looks more and more likely that the Maple Leafs will be making the playoffs this season. I’m not sure Toronto will know how to handle that sort of thing. Do they even remember what the playoffs are?

Washington Capitals: The Capitals are in a tight race for the playoffs this season. It’s either them or the Florida Panthers, and the two teams seems to be going back and forth with the third seed. It’s a good sign when you beat them 4-0 in your own building though.

Winnipeg Jets: The Jets are 5 points out of a playoff spot and are 4-5-1 in their last 10 games. But its seems like all of the teams around them are crashing, so one solid surge and this team could make a serious push for 8th place.

Anaheim Ducks- Niklas Hagman burned his former team, scoring the winning goal in the eighth round of a shootout against the visiting Calgary Flames. While they still have an uphill battle facing them, the Ducks, once left for dead, are currently ten points out of a playoff spot with 30 games to go.

Calgary Flames- Miikka Kiprusoff was denied his 300th career win when the Flames fell 3-2 to the Ducks Monday night, continuing a dubious streak of 14 straight losses when visiting the Ducks. Calgary hasn’t won in Anaheim since 2004. 2004!

Chicago Blackhawks- After a strong start to the season, Chicago has fallen hard as of late, losing six of their last seven games, the latest of which was a 5-2 drubbing at the hands of Colorado. As the trade deadline moves closer, don’t be surprised to see Chicago make a few moves, particularly at goaltender…

Colorado Avalanche- A mere point away from a playoff spot, the Avalanche aren’t missing Matt Duchene quite yet. While the third-year center is still out with a knee injury, Colorado has kept pace in the standings since putting Duchene on injured reserve, and with a win on Friday, they’ll vault into the eighth and final seed for the playoffs, at least for the time being….

Columbus Blue Jackets- Jeff Carter and Rick Nash, once deemed as the foundation for the Blue Jackets present and future, are currently on the trading block, as a major rebuild is in the works for Columbus. Nash will have to waive his no-trade clause, but its highly likely that he will do so if the right suitor comes along….

Dallas Stars- Continued their inconsistent ways with an up-and-down week. The beat Anaheim 6-2, lost 5-2 to the Sharks, beat Minnesota 2-1, then lost 4-1 to Phoenix. In an effort to even out their play, a roster shake-up may be coming. Defensemen Sheldon Souray and Nicklas Grossman are potentially on the trading block, as the Stars are in the market for a top-six forward to boost their scoring. Unlike last year, when the Stars dealt first-line winger James Neal for defenseman Alex Goligoski…

Detroit Red Wings- According to NHL.com, major news from Detroit will be announced on Thursday. This “major news” is likely to be a little tid-bit that most hockey fans have known for quite some time- the 2013 Winter Classic will be held in Detroit, and their opponent will be the Toronto Maple Leafs.

Edmonton Oilers- What other news could there be? Center Sam Gagner exploded for eight points, second best in a single game all-time, against the Blackhawks during an 8-4 win. He followed that up with two goals and an assist two days later, setting a team record by contributing on 11 straight team goals, breaking a mark previously held by, oh, you know, Wayne Gretzky….

Los Angeles Kings- They continue to defy logic, as they’re the NHL’s lowest scoring team with a mere 118, yet they’re comfortably sitting at seventh place in the Western Conference and are in line for a playoff berth. In other news, backup goaltender Jonathan Bernier’s name keeps popping up in trade rumors, as there are a number of teams looking for him to become their starting netminder, and the Kings are looking to add a top-six scoring threat or two…

Minnesota Wild- Talk about immediate return on investment; the Wild re-signed defenseman Nate Prosser to a two year deal on Monday, and a day later he scored his first career goal (needless to say, Prosser was re-signed for his defensive prowess, not his offensive ability).

Nashville Predators goaltender Pekka Rinne. Rinne and the Preds beat St. Louis for the fourth time this season on Saturday

Nashville Predators- The Predators continued their recent dominance of division-rival St. Louis on Saturday, as Nashville has now won all four meetings between the two teams this year.

St. Louis Blues- Goaltender Brian Elliot, a former journeyman who bounced from Ottawa to Colorado and then to St. Louis, all in the past two years, beat his former team when the Blues knocked off the Ottawa Senators 3-1 on Tuesday.

Vancouver Canucks- Cory Schneider may be on the move for Vancouver. He’s likely played his way out of a backup spot, and it will be tough for the ‘Nucks to hold onto him if the right deal comes their way.