Boston Bruins: Buyers. A team that once seemed untouchable is now struggling to survive. They need to bring in some help if they want to make another legitimate run at defending their title. 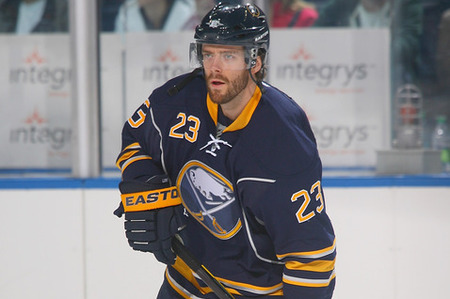 Could Buffalo's Ville Leino be on the trading block?

Buffalo Sabres: Sellers. By far. They did their buying in the off-season, and that didn’t work. Time to put the big boys on the market and sell them off to the highest bidder.

Carolina Hurricanes: Nothing. They aren’t going to make many moves. They aren’t doing well enough to make a run at a playoff spot, but they signed Tuomo Ruutu to a new deal which pretty much says that they are done.

Florida Panthers: Buyers. A team that can huge surprise this post-season, they are only a few good players away from becoming a serious contender to win the cup. Good talent, and excellent system should bring them far.

New Jersey Devils: Buyers. Probably won’t do much with Ponikarovsky and Foster already on the roster, but will probably make some moves for a veteran defenseman to help on the blue-line.

New York Islanders: Buyers. Yes, this team will be a buyer. It’s been a long time that the Islanders had a legitimate shot at making the playoffs, and if Charles Wang sees an opening, I can’t imagine that they will sit back and let another season roll on by.

New York Rangers: Buyers. Rick Nash? No, that’s not the answer for New York. Do you know what the asking price for Nash is these days? Dubinsky, Stepan, a 1st round draft pick and a prospect. Really New York? Just gut your team why don’t you?

Ottawa Senators: Buyers. This team is good enough to make some noise in the playoffs. Will they actually make a move? Probably not, but if the right move comes along I think they’ll make it.

Philadelphia Flyers: Buyers. Already picking up Kubina and Grossman, but I think this team is done for trades this season. Although you never know when you’re a Flyers fan. (cough…Mike Richards…cough…Jeff Carter…)

Pittsburgh Penguins: Nothing. They’re not going to make any moves this season. Wait for the prodigal son Crosby to come home from his concussion and see what kind of team you have then.

Toronto Maple Leafs: Buyers. Wait, the Leafs can make the playoffs? Come on Rick Nash, you love Toronto don’t you?

Washington Capitals: Nothing. Ovechkin is out, and this team is spiraling out of control. I think they should hibernate for the rest of the summer, starting now. Lick their wounds and come back next season with a new coach.

Winnipeg Jets: Nothing. Can’t see Winnipeg making any moves this season. Maybe a small move here and there, but they’re not going to make any noise.

Anaheim Ducks- Buyers. As ridiculous as this would have sounded two weeks or even a month ago, the Ducks, only five points out of a playoff spot right now, could be looking to add a piece or two to solidify their run to the postseason. Bobby Ryan, Corey Perry, Teemu Selanne and Lubomir Visnovsky are officially staying in Anaheim. The Ducks could be targeting a goalie to back up Jonas Hiller, or a defenseman to improve a corps that doesn’t have much beyond Visnovsky and Cam Fowler.

Calgary Flames- Buyers. Calgary is clinging to the eighth spot in the Western Conference, if only by a hair. If they want to stay where they are, or even move up in the playoff seeding, Calgary will have to add a few impact forwards. They have zero offense behind Jarome Iginla and Olli Jokinen, and could be in the market to make a play for Jeff Carter or Rick Nash from Columbus.

Chicago Blackhawks- Buyers. They’ve recovered from a nine-game losing streak, having won their last three games, but are still getting inconsistent play from everywhere but their top two lines. Expect them to target a goalie (Boston’s Tuukka Rask or possibly even Buffalo’s Ryan Miller) or a defenseman.

Colorado Avalanche- Nothing. Yes, they’re on the cusp of a playoff berth, but after their deal for Semyon Varlamov, they don’t have a first round pick to trade, and aren’t really in a position to buy anything without giving up too much. Colorado is a young team, and any “selling” would derail their rebuilding project. As a result, the Avalanche are probably going to sit tight and keep grinding with their current roster.

Where willl Rick Nash be after February 28th?

Columbus Blue Jackets- Sellers. Columbus has long been out of the playoff race, and will be looking to rebuild for the future. They’ll be looking to add young talent at every position, and there have been rampant rumors about Rick Nash and Jeff Carter being traded away for picks and prospects. Expect them to go after multiple prospects and draft picks by moving one of their two top forwards (Nash and Carter)…

Dallas Stars- Buyers. They’re teetering on the edge of playoff contention, and will be looking to add some offense for the stretch run. Their top target is probably Rick Nash, as they’ve got the cap space and prospects to make a move for someone of Nash’s caliber and pay grade. They need to be careful though, as the Stars aren’t nearly good enough right now as to be able to forsake the future with the idea that one player will vault them into Cup contention…

Detroit Red Wings- Sellers. They don’t really have anything they need to add, and will likely find a suitor for someone like goalie Ty Conklin or forward Valtteri Flippula…

Edmonton Oilers-Sellers. Once again, Edmonton is all but eliminated from the playoff race. They have a glut of young talent that teams will be looking to deal for, so expect them to deal forwards Sam Gagner or Magnus Pajaarvi for a pick and a defenseman.

Los Angeles Kings-Buyers. They badly, badly need offense. There’s only so many games you can win 1-0. They’ll likely be selling backup goaltender Jonathan Bernier, but look for them to possibly include him in a package with a defenseman (Slava Voynov? Thomas Hickey?) and disappointing, overpaid forward Dustin Penner. Dealing Penner will free up about $4 million in cap space, and will give the Kings room to add an offensively-productive forward.

Minnesota Wild-Sellers. They’ve slipped out of playoff contention, for the most part. Once at the top of the league standings, Minnesota is struggling to find goals and wins. Look for them to deal one of their backup goaltenders (Josh Harding and Matt Hackett) for a couple pieces.

Nashville Predators-Sellers. They have a good thing going, but likely won’t be able to keep both defensemen Shea Weber and Ryan Suter after this year. After watching Dallas lose C Brad Richards for nothing last year, Nashville would be wise to deal one of those two, more likely Suter, for a few pieces.

Phoenix Coyotes-Sellers. They’d like to be buyers, but their lack of an owner makes it impossible for them to start wheeling and dealing for big-name, high-priced free agents. They won’t give up anyone vital to their upcoming playoff run, but there is a strong possibility that some of their younger players and prospects could be dealt. Defenseman Oliver Ekman-Larsson and forwards Mikael Boedker could be on their way out of town. Don’t be surprised if one of the Coyotes’ goaltending prospects, like Mark Vesentin or Michael Lee, is shipped out as well.

Will Ryan Suter be traded before the deadline?

San Jose Sharks-Buyers. Their defense is struggling right now, having surrendered at least three goals in the past nine games. Dan Boyle and Brent Burns can’t do all the work. As a result, look for them to make a move for Calgary’s Jay Bouwmeester, Columbus’ James Wisniewski, or even Nashville’s Ryan Suter.

St. Louis Blues-Nothing. They’re winning with their current roster, which is a good mix of elite goaltending depth; young, talented defensemen; and capable forwards. St. Louis won’t want to rock the boat, and as a result will likely steer clear of the trade waters.

Vancouver Canucks- Sellers. Don’t worry Canucks fans, the Sedin twins and Ryan Kesler aren’t on their way out of town. Vancouver’s situation is quite similar to Detroit’s; they don’t have anything they really need to add, but stand to gain by dealing backup goaltender Cory Schneider to an overcompensating buyer.